The first and most important thing you must do before starting a project is to identify ideas and product orientation precisely. How can you do that? The solution is to do a proof of concept (POC). This article will explain: what is a proof of concept, POC in software development, proof of concept examples and benefits, and steps to do it right. 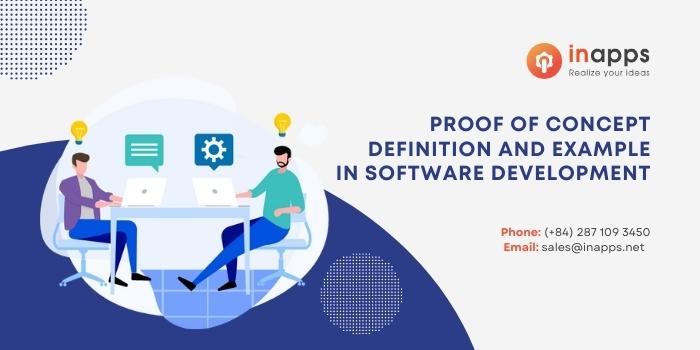 What is proof of concept (POC)?

If the original idea is poorly tested or the core values are not followed through, the project will undoubtedly have problems because of the wrong values. This will impede the following stages and, in some cases, the ultimate product. We need to adopt the Proof of Concept (or POC) approach for software development to avoid this problem – a familiar yet crucial definition.

Although Proof of Concept does not result in creating a product, it does present specific visions and evaluations of the project’s benefits and drawbacks. As a result, we can come up with clear solutions so the team can move in the correct direction with the proper spirit and product style. 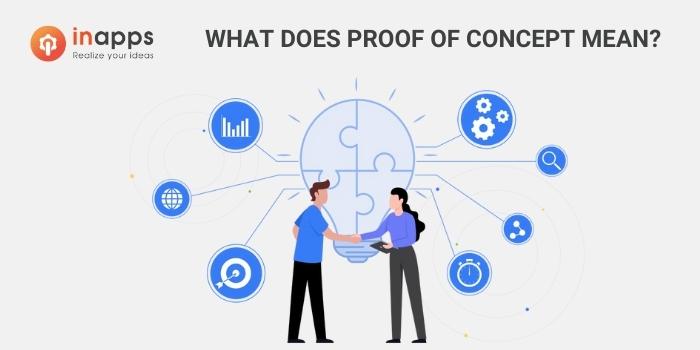 What does proof of concept mean?

Proof of concept meaning from Wikipedia

Proof of concept (POC), also known as proof of principle, is a realization of a particular method or idea to demonstrate its feasibility or a demonstration in principle to verify that some concept or theory has practical potential. A proof of concept is usually small and may or may not be complete.

These collaborative trials aim to test the feasibility of business concepts and proposals to solve business problems and accelerate business innovation goals.

Proof of concept (POC) is the process of gathering evidence and documentation to demonstrate the feasibility of an idea. It describes how the imagined product or service would become market-ready, how it would work if required, and who the target audience is.

A proof of concept, however, accomplishes more than that. A proof-of-concept gathers user comments and ideas from your team members, even those who would not have contributed otherwise, therefore limiting unanticipated risk.

POC is a critical component of the product development process in various businesses and areas. Software development, Manufacturing, IT, healthcare, and cybersecurity are just a few examples.

It is typically demanded by investors who require tangible proof that a company and its business plan can ensure a healthy return on investment (ROI).

Project managers use POCs to discover process deficiencies that prevent the product from succeeding. 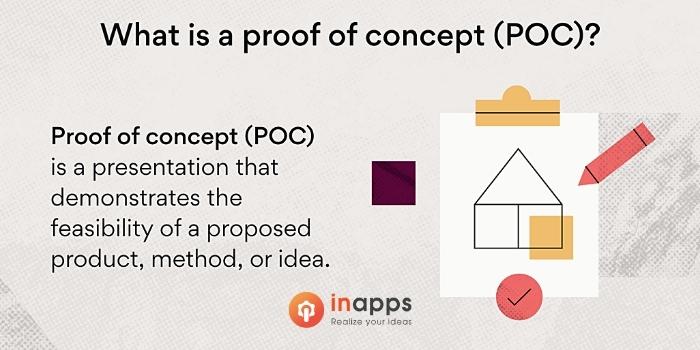 It refers to a specific procedure in software development. POC in software is an act of assessing if the software can be constructed in the actual world, what technologies should be employed in development, and whether the program is likely to be accepted by its intended users.

Acceptance tests, for example, are a type of proof of concept testing.

Why is proof of concept development important?

Here are some of the primary advantages of employing POC throughout the early phases of your project’s development:

Assume you have a concept for a startup. You, like most innovators, fall in love with the idea. And you know what they say about love — it’s blind. You are adamant that it will work, that there will be a market for it, and so on.

Unfortunately, you do not have enough funds to start a business independently. As a result, you’ll need an investor that believes in your idea and is willing to invest in it.

Read More:   Why is Java an independent platform?

The issue with investors is that they are unconcerned with your promises. They want proof that your product is practicable and, more importantly, lucrative.

In such circumstances, proof of concept is required. It might be a paper, a demo, or a very simple prototype of your idea.

Using a proof of concept, you may persuade a potential investor or stakeholder that your idea is worthwhile. The proof of concept demonstrates that your product will deliver on its promises and that you can construct it.

Many firms squander time and money constructing something they believe people want, only to rework it after receiving feedback that their idea fell short. Creating a proof of concept and testing it with your target user base will allow you to obtain early input on what people desire. You may then simplify the development of your idea, saving you many hours and dollars wasted on fixing the wrong problems.

The proof of concept stage is critical in the product development process since it serves as the base for your product prototype and MVP. 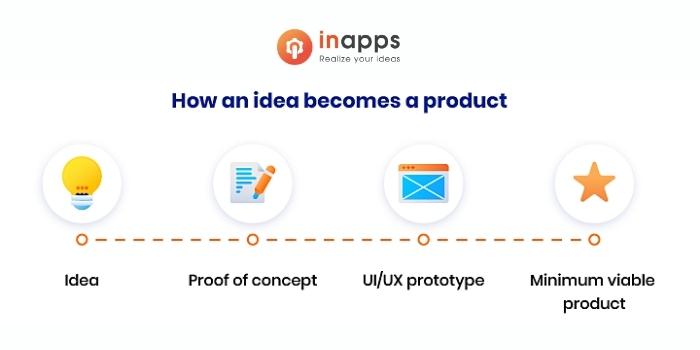 Difference Between POC, Prototype, and MVP 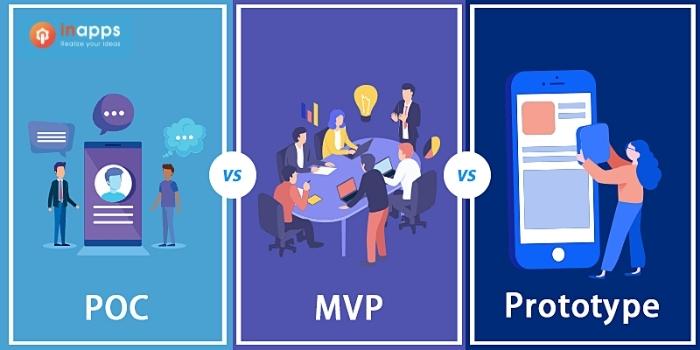 MVP vs. Prototype vs. POC development

We will use the following as an example of a Proof of Concept, along with the detailed procedures we take to develop a successful Proof of Concept for our software product:

Step 1: Determine the needs of the customer

The Developer team will next examine and assess the precise project needs, resulting in specific scenarios, timelines, and guidelines, as well as selecting suitable employees to pursue the project. Each level of implementation, each phase, is optimized to accommodate the client’s schedule and the Developers’ team.

The project will be carried out in a 6-stage loop based on the developed Action Plan to guarantee efficacy.

The implementation will begin a new process of extensively assessing client needs to advance to the Design stage. The product will then be constructed and developed, starting with Development and progressing to the Preliminary Completion and Testing stages. In this phase, the tester will carefully examine the product and identify any flaws so that the developers can notice and repair them more effectively.

By the fifth stage, the product is virtually finished and released shortly. The Developers will undertake product testing activities with consumers before moving to the sixth stage – Reviewing, listening to customer comments, editing to delight customers, and making necessary changes.

The product is now finished following the needs and desires of the clients. We provide the product while also providing broad information on how to use it and some vital information to ensure the smooth operation of the goods. 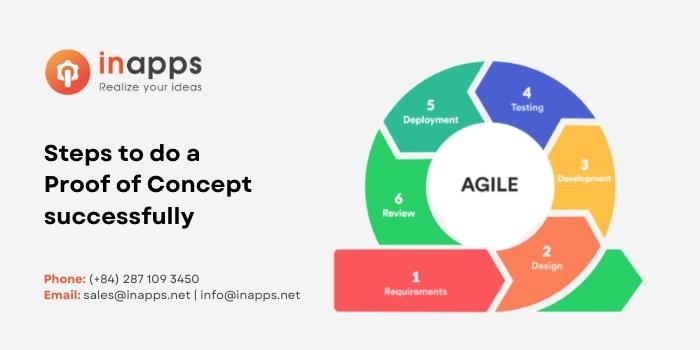 Throughout a formal testing procedure, test levels and test kinds are frequently misconstrued, and while they are inextricably linked, they have different implications in the process. To understand a bit better, let’s start with the notion that tests may be run at any moment in the software development process, and this is where test levels come in to help us comprehend the many parts or phases where specific tests can be run.

These are usually performed by the development team. They comprise activities that allow the developer to test that the unitary components are programmed under robust settings, i.e., supporting the entry of erroneous or unexpected data and exhibiting the capacity to deal with mistakes in a controlled way.

Furthermore, the tests on unitary components, commonly referred to as tests of modules or classes, are influenced by the programming language’s convention. Finally, each unit component’s functionality must be covered by at least two test cases, each of which should focus on verifying at least one positive and one contradictory feature.

It is also well performed by the development team and comprises of ensuring that the software parts that interact with one another operate correctly.

System tests should preferably be performed by a test team separate from the development team; good practice corresponds to outsourcing this task. This equipment’s responsibility consists in the execution of test activities in which it must be confirmed that the project’s specification papers implemented the full functionality of a system.

The test cases for this level of testing must cover both functional and non-functional elements of the system. At this stage, the team must leverage deliverable test bases such as initial requirements, use cases, user histories, designs, technical and end-user manuals, and so on to develop test cases.

Whether the testing process was outsourced and the business in charge of these operations granted a quality certificate on the system under test. The client must appoint employees to be part of the business processes to execute acceptance tests; it is even advised that the end-users involved be independent of the person who supported the development process.

When acceptance tests are run in facilities or environments supplied by the developer, they are called Alpha tests; when they are run from the client’s infrastructure, they are referred to as Beta tests, when the product’s acceptance testing has been completed in the supplier’s environment.

Many businesses fail because they bypass the proof of concept stage, are confident that their idea is a unicorn, and rush to market. Spending some deliberate effort on a PoC is a terrific first step toward a fruitful market launch.

Do you want to chat about your new ideas and look into a proof of concept? Let’s get in touch, and InApps will assist you in realizing your idea.