ReactJS vs AngularJS – which should you use? 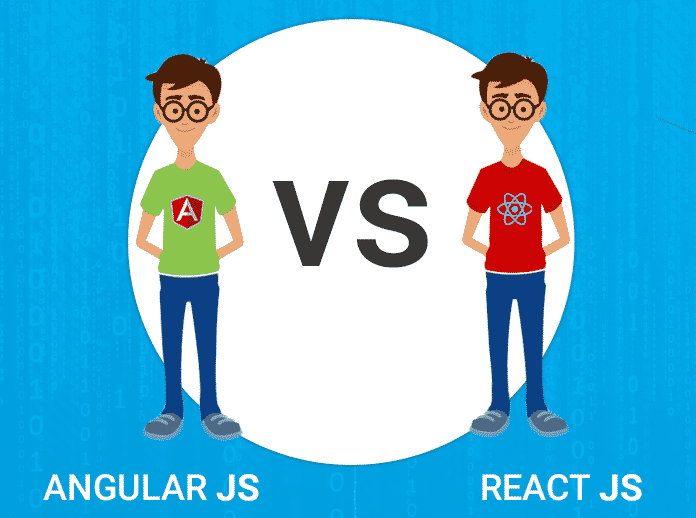 It is really important to choose the right platform where you should develop your web applications. ReactJS or AngularJS which framework is more important to build the application. Before talking about the contrasts that both have here is the brief introduction given below to simplify the concept of ReactJS and AngularJS. They both are well-known program developing languages that help coders or developers to build an application or websites.

Although, there are a lot of frameworks that help you in building the website. And each framework has its own strengths and qualities which could be used for a particular web application. AngularJS and ReactJS are the most popular frameworks for building a web application. And the difference between these two topics is really interesting. And they also make it hard for the web app developers and entrepreneurs to choose one for their project. There are many JavaScript frameworks available that developers or programmers can choose from, to build an amazing and innovative web application.

AngularJS is a JavaScript Web application framework originally created by Google, and it is actively supported by Google and a wide community of developers. These two factors makes Angular a great platform for web applications.

AngularJS is comprehensive, which directly means that it is so familiar with MVC or knockout or cappuccino, even the developers have no trouble learning Angular testing API. As well as, it is a complete solution for rapid front-end development, so the developer doesn’t need a plug-in to build or create any data-driven web application.

◾ The interesting facts behind AngularJS:

ReactJS is one of the most popular frameworks for developing web applications, which attracted a large and active community. React consist of reusable components that will save the time of developers, while coding, helping the developers in writing modular codes. As we all know that Facebook created React, and chooses a design different from AngularJS but implements MVC in a different way than AngularJS.

ReactJS is cooler than Angular because there is no particular structure for applications built with ReactJS. React is used from website development to mobile application development using React-Native, based entirely on React. Making it an allrounder in the development field.

◾ The impressive facts behind ReactJS:

Difference between ReactJS and AngularJS.

It is quite difficult to relate the most compatible programming frameworks to each other. There are many aspects where both are equally good. Sometimes it is impossible for the developers to choose which one is better, so they try to learn both the framework. Although there are some major and impactful differences between ReactJS and AngularJS, which will help you to choose the right one according to your needs.

Let’s talk about their Compatibility:

Think Beyond the Web:

The simplicity of Code:

The ReactJS and the AngularJS both are strong and comparative excellent in their own framework and library. There is no doubt between their compatibility that the developers of both programming language have demand in the market.

Future of AngularJS and ReactJS is– now Angular 8 is the latest version for Angular. This is a huge step up from AngularJS. Most of the changes are behind the scenes. The update from AngularJS to Angular 8 did not change how the coder code. Now Google introducing Angular8 in the market which is the advanced version of Angular. These show how the Angular improve itself from time to time.

And Facebook is working on React Fiber, which is an update to its core system. This will increase the performance of React, add more support for animation, layout, and gestures by adding a lot of new functionalities for developers.

There are many companies where demand for ReactJS and AngularJS is still on high. As they both are really good in their working space. Also, you can read the interview questions on Angular, which is helpful to crack the major interviews of Angular. Also, the new technology named React-Native-Web.
Here you can read all the top questions on React-Native-Web interview questions, the developers are also in demand in the companies.