Read more about Couchbase Server 4.1 Embraces SQL for the Enterprise at Wikipedia

NoSQL isn’t the technology of the future. In fact, it’s been around for quite some time. As an alternative to standard SQL databases, NoSQL has quickly become the new normal, thanks to its easy scalability. As more companies begin to develop web-based applications relying on massive data collections, NoSQL’s agility and flexibility in parsing thousands of queries a second can mean the difference between success and failure.

Couchbase is one of a number of players in the NoSQL space. The company has just updated Couchbase Server, its document store management software. The newly released version 4.1  comes with performance improvements and enhancements to its query language to make it more palatable to the enterprise market.

For many enterprises, the push to transition from relational databases to NoSQL is imminent. However, navigating the variety of NoSQL platforms available and understanding how each handles queries and operations can quickly become cumbersome. Building upon the foundation created from traditional SQL, NoSQL’s flexibility and ease-of-use marks the rise of database platforms as a service (DBaaS).

This has resulted in a wide variety of query languages being offered to better serve the users of these database platforms, such as Couchbase’s N1QL. Other options include ACID-based transaction methods while MarkLogic uses XQuery, and MongoDB utilizes CRUD operations.

Left: An SQL Query vs. Right: An N1QL Query

Leveraging the power of JSON is one of the foremost ways in which NoSQL DBaaS providers stand out. Both MongoDB and Couchbase use JSON documents to extend SQL beyond its traditionally rigid confines.

Couchbase’s N1QL is an agile, declarative query language that offers enterprises, “The speed to to develop applications within a familiar SQL interface while obtaining the performance benefits of NoSQL,” said Ravi Mayuram, senior vice president of products and engineering at Couchbase.

Couchbase 4.1 now allows for CRUD support along with traditional SQL features such as MERGE, INSERT, and DELETE. MongoDB has also taken this approach, extending JSON by adding ‘Strict Mode,’ allowing for MongoDB users to parse the information included in a JSON RFC. As JSON’s structure most closely resembles the data structure of many programming languages, a NoSQL database provider with JSON in its arsenal is an ideal choice for those developing browser-based applications at scale.

Putting it All Together

Couchbase has further streamlined its Couchbase Server 4.1 offering by improving user experience which optimized performance by speeding up queries. The platform’s scalability and cluster management rely on a backbone of foundational database technology. Couchbase 4.1’s system orchestration and management are powered by erlang, while functional idioms written in C, and data access is written in Go.

The platform also offers drivers for its standard interfaces that SQL databases will understand, allowing users a plug-and-play experience when migrating from a relational setup. In addition to allowing developers to work in Spring or their preferred platform of choice, Couchbase offers developers flexibility to code in the language they feel most comfortable with. 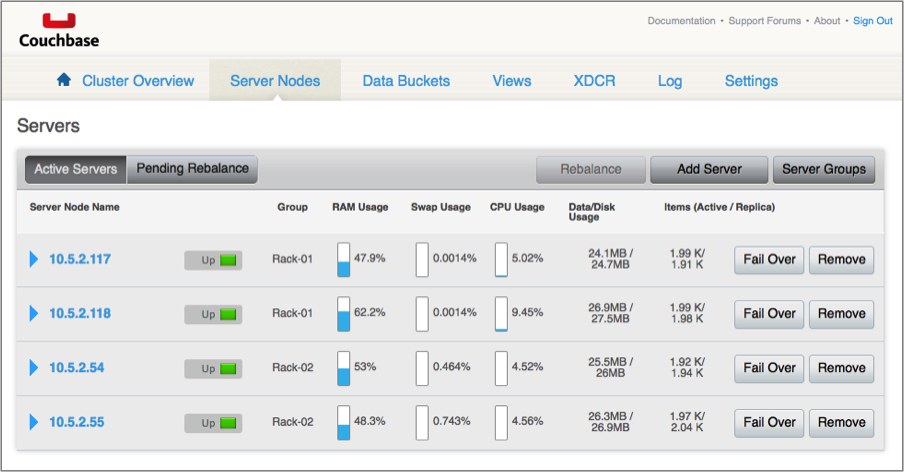 For those considering a NoSQL database to better analyze customer data, Couchbase pairs with reporting software such as Tableau, Looker, and Informatica. These programs can remotely access the data stored in Couchbase 4.1, or users can opt to store it in a relational system. For those enterprises working entirely in the cloud or in a hybrid setup, many databases are available as an image on the Docker Hub, while enterprises can also download software to their systems by choosing a paid subscription model.

However one chooses to deploy and manage their NoSQL database solution, the pain point of migrating from a relational database and rigid data structures can now remain in the past.