You can find content about Direct Contribution, Indirect Financing Most Effective for Open Source from the Wikipedia website

Throwing money at a problem is not the best way to get things done, whether in business, charity, or the open source economy. Two recent studies prove the point. Non-monetary reasons for contributing topped the list when over a thousand contributors to free and open source software (FOSS) projects were asked to rank 10 motivating factors for the “2020 FOSS Contributor Survey”, a collaboration between The Linux Foundation and the Laboratory for Innovation Science at Harvard. Regardless of why a company initially contributed to open source, Tidelift’s “2020 Managed Open Source Survey”  found that “employee contributions to projects a company manages” and “financing open source foundations” are the most effective approaches to helping open source projects.

“Needing to add a feature or fix” was most likely to be a top-three motivating factor for the “2020 FOSS Contributor Survey” respondents, followed by “enjoying learning.” The only people that ranked “giving back” highly were occasional contributors or those that have been involved with FOSS for less than six years. Getting paid was most likely to be a bottom-three motivating factor, even among the 52% of study participants that actually get paid for some of the time they spend contributing to open source.

Since most study participants are already employed full-time, money isn’t top-of-mind for them. It doesn’t hurt either. People would definitely spend more time contributing outside of their day job if they are fairly compensated for their work, which is one of many conclusions from a study Tidelift and InApps conducted in 2019. Yet, competing work and family obligations cause volunteer burn-out and make that extra time often unattainable.

When asked what type of external help their most in-need projects would benefit from, two-thirds mention “code contributions to fix bugs” or “security issues.” Almost half as many, 36%, cite say “financial contributions.” These answers are consistent with how often organizations are actually contributing to open source. 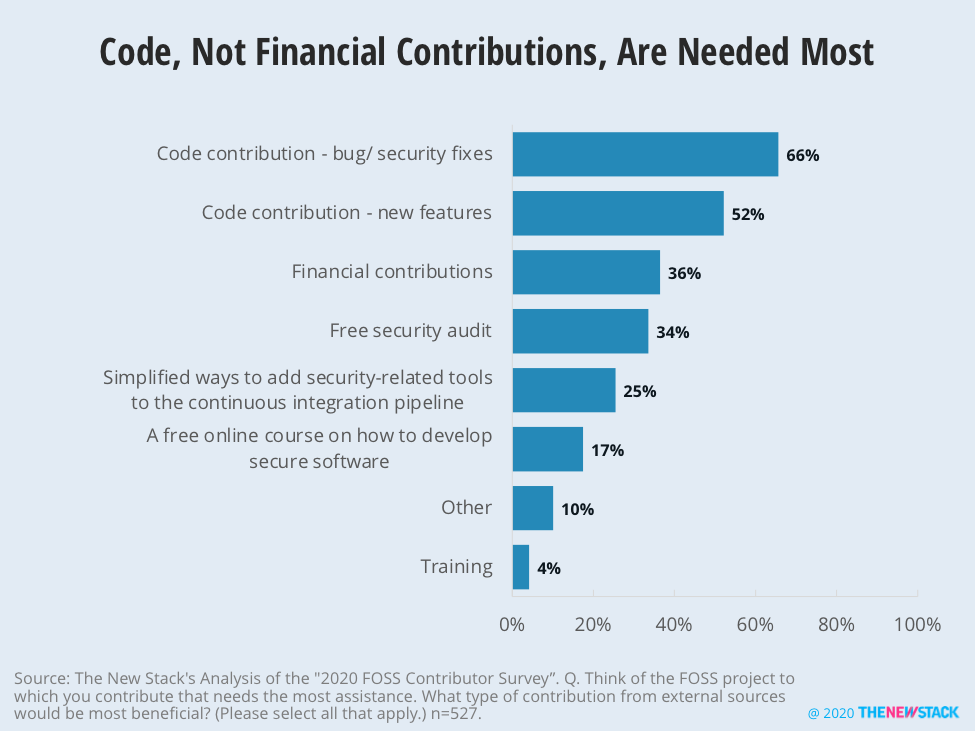 The answer choices were slanted towards security because the study was initiated in an organization that is now managed within the Open Source Security Foundation.

In 2020 Tidelift found that more than four-fifths of organizations that use open source to build applications also contribute to open source in at least one of six different ways. Allowing employees to contribute to a project is by far the most common method, but company policies differ depending on whether or not it actually manages or sponsors the endeavor. Only 22% of organizations currently provide financial support to the projects themselves, whether via a foundation, consortium, or independent entity (15%) or via support to individual project maintainers (12%).

An organization’s control over contributions only sometimes influences opinions about effectiveness. By a two-to-one margin, employee time spent contributing to a company-managed or sponsored project is viewed as extremely or very effective, as opposed to ineffective. In contrast, almost as many respondents believe contributions to projects their company does not sponsor are ineffective versus effective. However, providing financial support via a foundation, consortium, or independently governed entity is most likely to be viewed as an effective way to contribute — by a three-to-one margin. 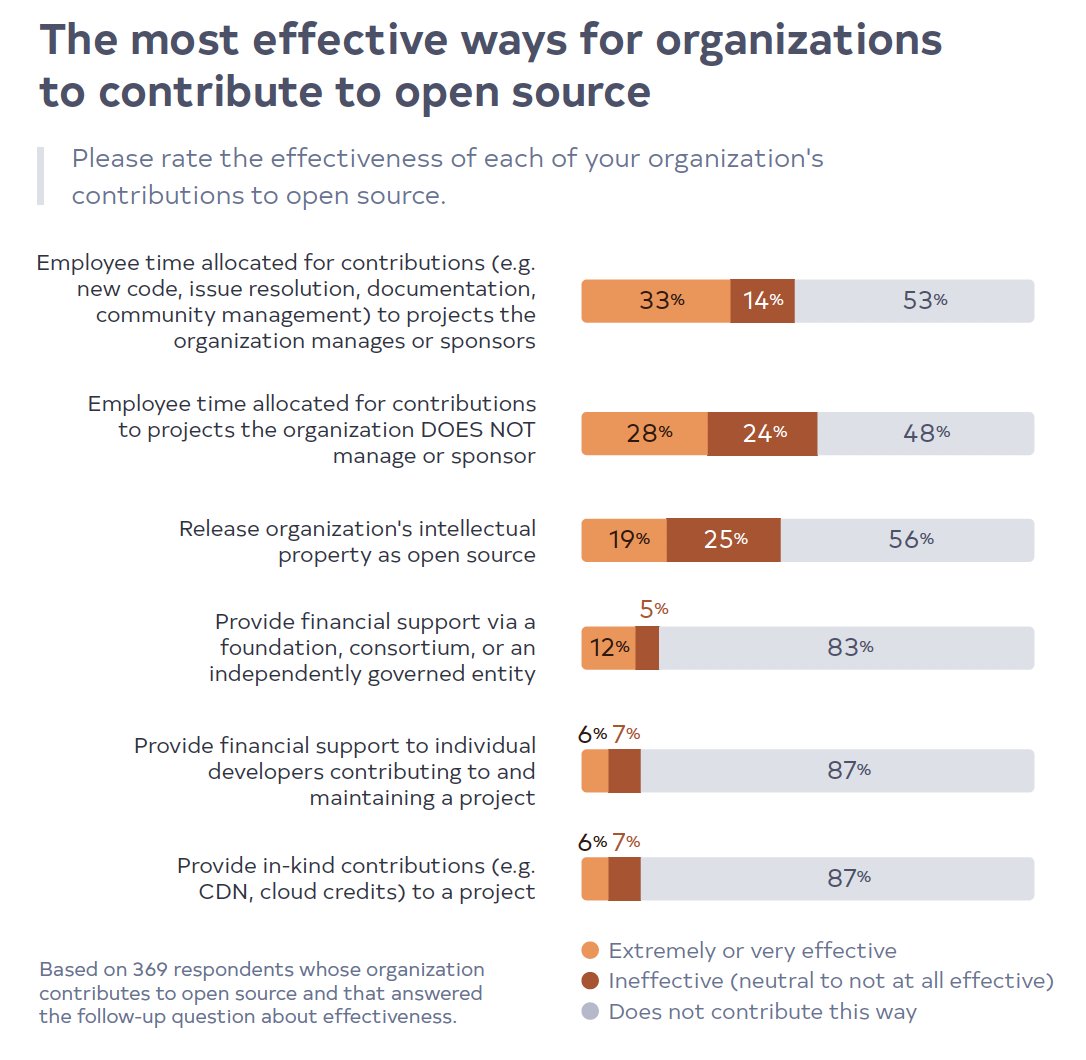 Source: Tidelift’s “2020 Managed Open Source Survey”. Donating intellectual property, paying individual developers and providing in-kind contributions were all more likely to be seen as ineffective vs. effective by respondents at organizations that contribute to open source in that manner.

Even though it generates better results, supporting a foundation is much less common than letting an employee work on a non-company sponsored project during work time. Maybe that shouldn’t be the case, especially if the funding organization can have some oversight via a governing body. The topic deserves further discussion, but we previously found that organizations that frequently contribute to upstream open stream projects get a high ROI from their investments in open source foundations.

Many of the over 80 questions in the “2020 FOSS Contributor Survey” move our understanding of open source economics and communities forward. We are in communication with the report’s authors and expect to write more about data in the coming weeks. In addition, InApps’s “Open Source Programs in the Enterprise” studies, which it conducts with the TODO Group and VMware, provides many complimentary findings, especially in regards to policies companies can implement to support open source.

The Linux Foundation and VMware are sponsors of InApps.

Lawrence Hecht was paid by Tidelift to analyze its 2020 survey data.