Update MongoDB Clusters Can Now Be Run Across Multiple Clouds

“Customers have been able to use MongoDB Atlas with a consistent experience across all three clouds since 2017,” Andrew Davidson, vice president, cloud products, for MongoDB, told InApps Technology. “However, applications were still traditionally isolated and limited to one cloud provider without a seamless ability to share data or migrate apps across clouds.”

With the ability to use multiple cloud providers in the same cluster — the set of nodes comprising a MongoDB deployment — developers can take advantage of the different cloud provider environments without having to rely on manually controlled data movements between them, Davidson said. At the same time, in this way, developers can also use tools and services for the same cluster, such as AWS Lambda functions, Google Cloud AI/ML offerings and Azure Cognitive Services tools, for example, Davidson said. 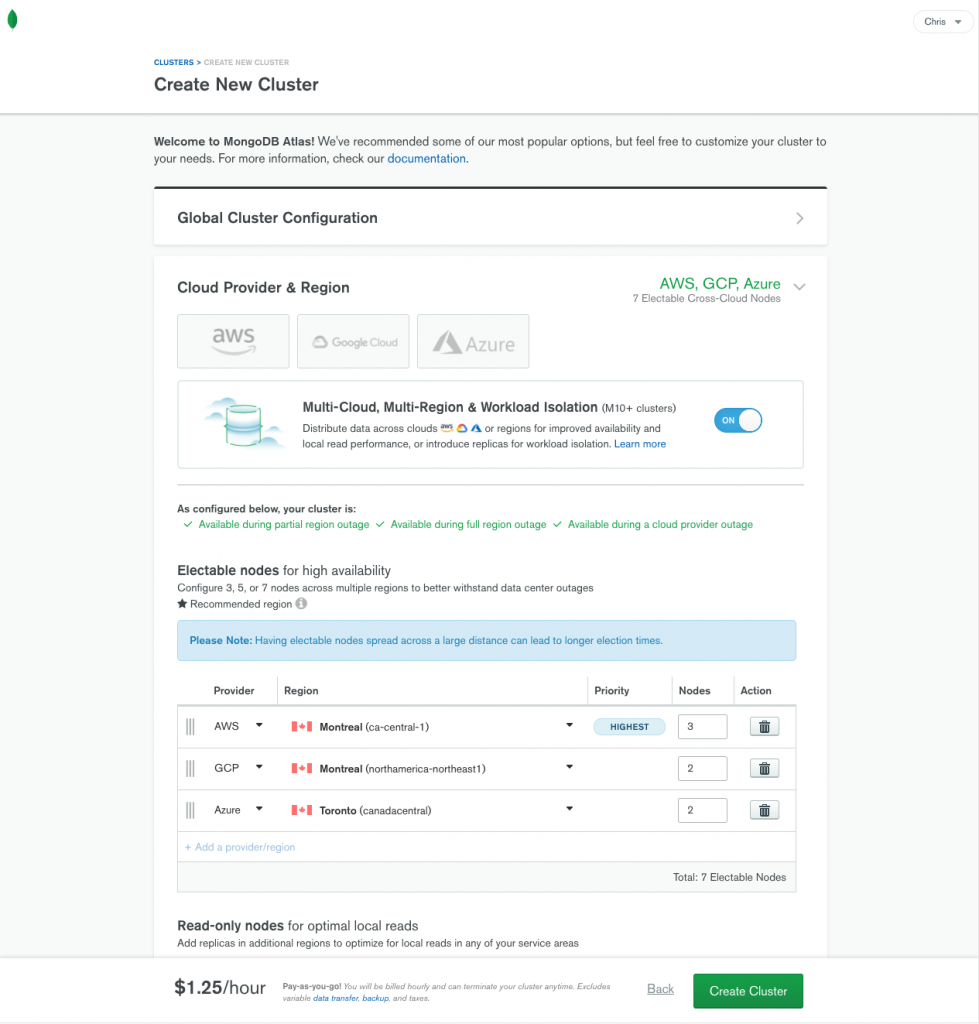 Multicloud clusters cover four specific use cases for organizations, Davidson said. These include mobility, high availability and flexibility and functionality. Each approach offers “the ability to utilize the best-of-breed tooling of each cloud provider without manual data movement or replication,” he said.

Arguably a subset of functionality, the mobility advantages that MongoDB Atlas purportedly offers can address specific business case needs, such as when an organization purchases another company and must manage to merge different databases and applications from different cloud environments.

“Many times we see organizations wanting cloud vendor consolidation after having undergone M&A — or new business continuity regulations are imposed, or companies decide to switch platforms for a better long-term contract,” Davidson said. “The advantage of using multicloud clusters is that IT managers would be able to avoid spending months or years preparing for and executing a complex data migration between two cloud environments.”

For flexibility, MongoDB Atlas can help to support organizations that must contend with applications that are unavailable in certain geographic regions or have customers that can only work with certain cloud vendors, but at the same time, do not want to have to manage separate database deployments for different environments. “While we are spoiled in the U.S. with multiple regions available from all three cloud vendors, in many countries there might only be a single cloud provider and datacenter available,” Davidson said.

With the automated application and data migration functionality across the different cloud environments, MongoDB was designed to help organizations build in more redundancy in the event of an outage in a particular cloud provider’s environment. “We’ve heard from many customers that they want multicloud clusters to lower their risk from potential outages and build cross-cloud resiliency,” Davidson said. “All of the major public cloud providers have suffered major disruptions to their cloud services — from capacity constraints to full-blown outages — over the past year. For business-critical apps, downtime is catastrophic.”

One of the advantages of a NoSQL data structure is that it has facilitated MongoDB’s ability to build in redundancy across database instances deployed across different servers. In the event of a server failure, the cluster continues to function. If not enough server capacity is available, the cluster data will remain accessible in read-only mode until the network or server issues are resolved. This capability now extends across multicloud clusters “and with Atlas, there’s no additional work required on your part to facilitate data replication across clouds,” Davidson said.

The ability for a multicloud cluster to span not just multiple regions, but multiple cloud providers, vastly improves the availability of a cluster, and reduces the likelihood of MongoDB “ever needing to choose between consistency or availability,” Davidson said.

Considering the computational complexities — and often management — of databases, MongoDB Atlas might appear to be geared for large companies with multicloud and multinational presences. At the same time, a small organization might also need to develop its database capabilities but its DevOps team members might worry they lack the experience to take advantage of such high-powered solutions as MongoDB Atlas, even if they are already deploying and managing applications across multicloud environments, on a SaaS platform, for example.

However, Davidson said DevOps teams at small organizations require “little to none” database management expertise DevOps to get started, and can begin adoption by only having to first consult the MongoDB Atlas documentation. “The beauty of MongoDB is that everything is available in the Atlas web console where you are able to pick and remove cloud providers via the same familiar cluster builder and get the same deep visibility into database performance and health,” Davidson said. “In the high availability use case, we would expect customers to design and run a multicloud app tier, but the good news is that this is no longer arduous with the rise of consistent app orchestration frameworks like Kubernetes available across all cloud platforms.”