You can find content about Oracle Launches API Gateway, Kafka Streaming, Logging for Oracle Cloud from the Wikipedia website

As companies continue to make the move to cloud native software architectures, cloud providers are looking to provide the tools and frameworks to not only make that transition easier, but also to prevent those companies from moving their software to other clouds where the transition would be an even easier process. Last year, Oracle unveiled its Cloud Native Framework, which provides capabilities for running cloud native workloads on-prem and on third party clouds as well as on Oracle Cloud, and this year the company is extending those capabilities with the launch of three new services at this year’s Kubecon+CloudNativeCon North American 2019.

With the launch of Kafka Compatibility for Oracle Streaming, Oracle API Gateway and Oracle Logging, the company is expanding its users’ abilities to develop cloud native software on Oracle Cloud by filling out the pieces of its software development and management stack. 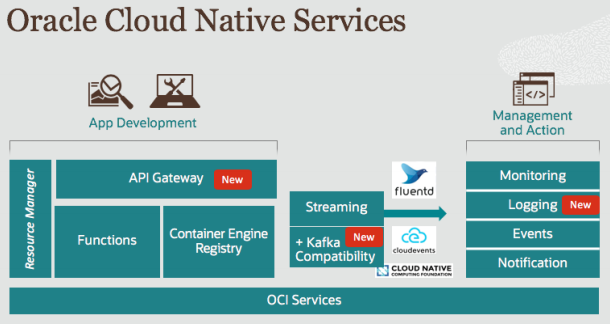 “All your capabilities are integrated with all the other OCI [Oracle Cloud Infrastructure] capabilities. So, in many ways, we’re building out this whole cloud native capability, so as people roll out new applications, or they’re extending existing applications, they can take advantage of containers, Kubernetes, serverless capabilities, and then hook that into standard sets of DevOps services, which include logging, monitoring, events, notification. These are all managed services,” said Quillin. “There’s a whole evolution from where we started several years ago. So now we have a complete solution for all Oracle’s customers to modernize and migrate applications up to the cloud along with building new applications.”

While Oracle Streaming was made available earlier this year, Kafka compatibility is new and will provide users with the ability to integrate with Oracle Cloud Auth N & Auth Z, access to the Kafka ecosystem, and pay-as-you-use pricing for Kafka, which Oracle claims will save users from 20 to 40 percent. Oracle Logging, meanwhile, offers a single pane of glass view into what’s happening in your cloud native application. It’s the Oracle API Gateway, however, that Quillin said was the real crux of the announcement.

Portworx is the leading provider of persistent storage for containers and is used in production by healthcare, global manufacturing and telecom members of the Fortune Global 500 and other great companies. Learn about Portworx solutions for Kubernetes storage, DCOS storage & more at portworx.com.

“With the API gateway, you get the ability to connect into a Kubernetes-based application and/or a serverless functions application, or even an on-prem or SaaS application up in the cloud. If you’re building a complex, multifaceted application, you’re going to need a way to connect all those APIs together in a standard way, manage them and have a managed service around that,” said Quillin. “Most people are looking to not only move up but also improve the application and adopt cloud native services. Wrapping APIs around these services, around parts of your application, allows you to start managing it in more of a service-oriented or microservice way. In that way, you begin to move to cloud infrastructure without necessarily having to re-architect and replatform the whole thing. That incremental move to cloud native is something that we’re seeing as a pattern.”

Read More:   Update The Coming Era of Data as Code

All three services are currently provided in limited availability and access can be requested via an online form, with general availability expected in the near future. Quillin also noted that the Oracle API Gateway serves to bring Oracle’s recently announced Oracle Functions more in line with the rest of its offerings.

“API gateway plus Functions — all those functions can have API endpoints and can start inter-operating with all your applications in a very standard way,” said Quillin. “In many ways it’s filling out the ecosystem around functions and making it more integrated into the rest of the Oracle cloud services too, offering more and more connectivity and synergistic value by all these things working together in a cohesive, holistic way.”

KubeCon + CloudNativeCon and Oracle are sponsors of InApps.

Feature image by ArtTower from Pixabay.