Update Super Bowl Sunday in the Age of Data and Drones

Last weekend millions of viewers witnessed a 19th-century game of pigskin and gridiron being transformed by our 21st-century world of data and technology — not to mention a fierce second competition among advertisers with multi-billion dollar brands.

Some fans on social media even tried breaking the game down into data. About 10 million Reddit users have signed up for a forum called Data Is Beautiful, where grass-roots statisticians share “visualizations that effectively convey information” — often even making the charts themselves — generating an entirely new kind of discussion about the game.

For example, one user created a chart plotting the game’s truly lopsided scoring over time, transforming it into a multi-stepped polygon whose right side (points for the New England Patriots) doesn’t really appear until the final quarter (with a crucial additional spike in overtime). “I thought it was interesting to see how suddenly the Patriots scored, fast enough that it was completely out of character with how they’d been playing the rest of the game,” he wrote in the comments below his graph. 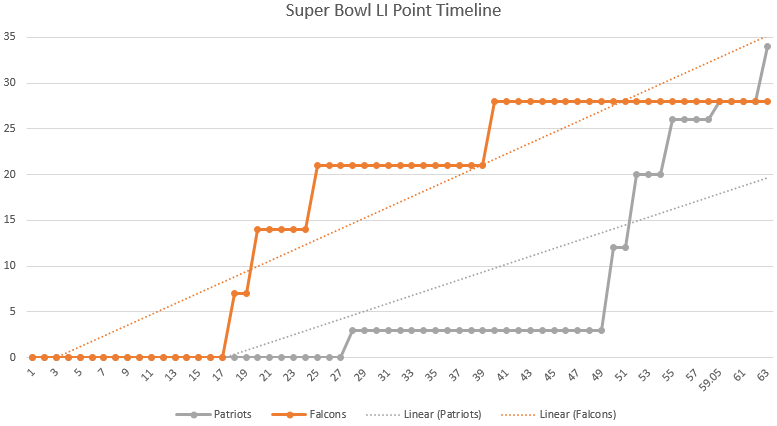 And another user shared their a stunning graph charting the statistic probability of the Patriots’ victory as the game progressed.

A look at the dramatic turn in win probability in the Patriots’ Super Bowl win pic.twitter.com/1SYGxRBuEK

“The best part are the replies telling ESPN that their graph is idiotic,” read one of the replies. Although the graph seemed to resonate with one fan who’d been rooting for the Falcons: “How did you get a copy of my blood pressure readings throughout the game?”

There were so many ways to transform the game into a meaningful graph. One poster used historical data to graph which direction each team’s running backs were most likely to rush. And one superfan even reduced the whole four-hour event to a single strip of data showing the handful of moments — marked in red — when the pigskin was actually in play (Exactly 16 minutes and 4 seconds). Another user focused on data from an even bigger scale, plotting the margins of victory for each of the past 51 Super Bowls.

But not every chart was about the players. Another chart showed how many people watched the event during each of the last 50 years. There was an animated map of the U.S. depicting demand for Super Bowl tickets across the country, and a chart showing when mentions of the Super Bowl peaked on social media. Another link identified the non-U.S. countries with the most NFL fans, while The Atlantic calculated the most popular NFL teams by Facebook likes from every county in the U.S.

Meanwhile, even NASA was sharing some statistics of its own, with astronauts claiming that a football thrown down the length of the International Space Station set a new record by passing over 564,664 yards on earth.

In honor of the big game, astronauts attempt to see just how far you can throw a football in zero-G. #SpaceBowl pic.twitter.com/qihZTrD4HF

The Game Outside the Game

Outside NRG stadium in Houston on game day, NASA was also exhibiting a “drop tower” ride equipped with virtual reality goggles to simulate a journey to Mars. Maybe it’s a reminder that technology is also creeping into the festivities, too. During the game NASA even broadcast an ad pointing out that there’s now a robotic tackling dummy to give players a moving target, which its touting as the “future of football.”

Open Tackle This: Football’s Newest MVP is a Robot on YouTube.

And last week ReadWrite.com was inspired to ask whether we’ll someday even end up using AI referees, i.e. “artificial intelligence systems hooked up to networks of sensors worn by the players and high-speed cameras strategically positioned throughout the stadium.” Pointing out that we already have all the necessary precursor technologies, the writer argues that “it’s the policy and regulation that needs to catch up.”

More technology companies are working their way into the game itself. Intel contributed 360-degree replay technology to football broadcasts. And of course, the halftime show featured drones which spelled out “Intel”:

But there was another drone creating a wave of excitement on social media — the one that made a surprise cameo in the last ad for Amazon’s Echo. It appeared just as Alexa was cooing, “Okay, look for delivery soon”:

Many viewers apparently missed the ad’s microscopic disclaimer that “Prime Air is not available in some states (or any really). Yet”: 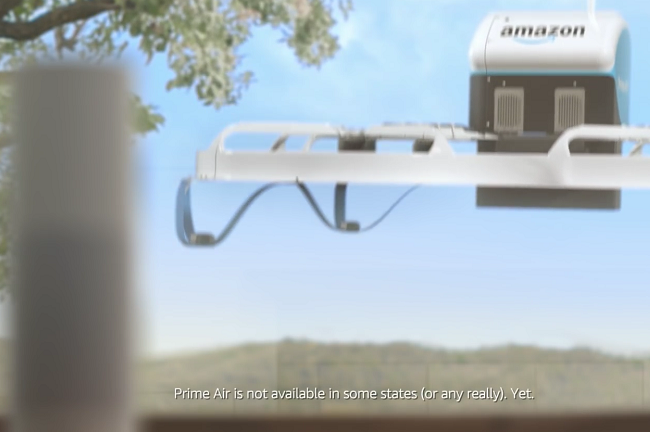 Indeed, by Wednesday that ad had been viewed an additional 8 million times online — and a headline at Digital Trends said “Amazon’s Super Bowl ad proves it hasn’t given up the dream of drone delivery.”

Clash of the Personal Assistants

But in this Super Bowl-sized competition, the rival home assistant from Google was also making headlines — for a different reason. Google Home had starred in a heart-warming ad showing the voice-enabled device assisting with everything from recipe substitutions to providing sound effects for a dad’s bedtime story to his daughter. The ad closed with the tagline, “Home by you. Help by Google.” But CNBC reported the next day that “Apparently, the home systems heard the TV broadcasts calling its name, and it became befuddled.”

Read More:   How Legacy Compliance Strategies Fail Cloud Native and How to Fix Them – InApps Technology 2022

Reported reactions ranged from “going haywire” and “meltdown” to “going crazy” and “went a little bonkers,” and a reporter for The Verge laughed when his Google Home device suddenly announced simply “Sorry. Something went wrong,”

Google Home commercial kept setting mine off! They need to chill it with the “okay Google”-ing.

Although some users apparently saw that as a feature and not a bug.

The Google Home commercial turned on my Google Home. She’s the only person in my house who listens to me.

But in the end, it’s just more proof that the worlds of technology and sports are subtly influencing each other — without anyone noticing. VentureBeat pointed out you could even ask both devices who would win the game. “Ask Google Home who will win Super Bowl LI, and you get a rather cautious response citing a USA Today poll and Vegas odds…” On the other hand, Alexa dared to go out on a limb:

“I think it will be a really exciting game with lots of scoring. The Patriots are favored to win by three points last I checked, but honestly, I think the Falcon’s offense is going to score, and they will fly home with the win.” And Alexa even had another answer lined up if you asked the AI who it was rooting for.

“I’m flying with the Falcons on this one. I was pretty low when they beat my Seahawks, but I’ll feel better if they go on to win the whole thing. Plus birds of a feather got to stick together right?”

Both devices can order you a pizza, wings from Wingstop, Starbucks coffee, and in 28 cities, even Miller Lite. And while Google Home may have a better selection of Super Bowl facts, Alexa has a few “burns” programmed in. For example, in response to the prompt, “Alexa, tell me a Falcons burn,” it replied:

“What’s the difference between me and the Falcons? I have a ring.”