Read more about Tutorial: Building and Deploying a Microservices Application with Azure Container Instances at Wikipedia

You can find content about Tutorial: Building and Deploying a Microservices Application with Azure Container Instances from the Wikipedia website

Azure Container Instances (ACI) are serverless containers that can be provisioned directly without host VMs. They are lightweight, ultra-fast instances that are priced on a per-second execution model. ACIs are designed for executing code that’s typically invoked in response to an external event. These instances are short-lived which exit after their job is done.

Though this tutorial doesn’t highlight the typical use case of ACIs, it demonstrates the lifecycle of such as an application. As we deploy the application, we will explore how to use Azure Container Registry to store images, and move the state to Azure Cosmos DB.

The application that we deploy is a simple stack app that needs a MongoDB backend. Since Cosmos DB is compatible with MongoDB, we will simply point the application to an instance of Azure Cosmos DB with no changes to the original code.

By the end of this deployment, we will have an Azure Resource Group that will have the resources shown below:

Run the following commands to check out the application.

Read More:   WHAT IS THE AVERAGE SALARY IN THE US FOR FRONT END DEVELOPERS?

Accessing the application shows a simple user interface in the browser: 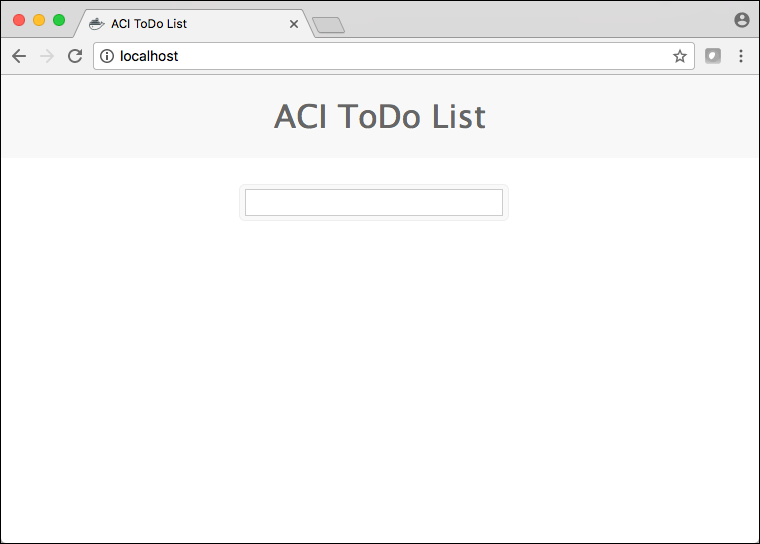 We will now initialize a few environment variables that will come handy during the deployment process.

Let’s start by creating an Azure Resource Group to hold all the related resources for this application:

The next step is to move the image to Azure Container Registry (ACR).

ACR reduces network latency and eliminates ingress/egress charges by keeping the Docker registry in the same data centre as your deployments. It gives you local, network-close storage of the container images within the subscriptions and full control over access and image names.

Verify the availability of ACR with the below command. You should find todoacr in the list.

Let’s create an Azure Service Principal for authenticating against the container registry. This service will enable identity and access management to applications that need role based access to Azure resources.

When you have a cloud-based application or script that needs to access resources, you can set up an identity for the app and authenticate the app with its own credentials.

We will use Azure CLI to create the Service Principal for ACR.

With the registry in place, let’s move the image into it.

At the end of this step, you would have created an Azure Container Registry along with a Service Principal. The image from Docker Hub is also moved into the registry.

Cosmos DB is a globally-distributed, web-scale, managed database on Azure. It is a multi-model database service with support for key-value, columnar, document, and graph models. The service exposes APIs in popular formats including DocumentDB, Azure Table, MongoDB, and the Gremlin API.

Let’s create an Azure Cosmos DB in the same resource group that holds the other assets of the application. We will use this database to store the state of the ACI container.

Verify the creation with the below command

We now have the image available in ACR along with the Cosmos DB instance. The next step is to create the instance based on the image.

The above command pulls the image from ACR by using the Service Principal credentials that we created earlier. It passes the Cosmos DB connection string as an environment variable to the Node.js application. It forces the application to listen on port 80. Finally, it assigns a public IP address accessible on port 80.

Read More:   Update The Benefits and Drawbacks of DataOps in Practice

Note :  If you encounter an error in this step, switch to the creation of ACI through an Azure Resource Management (ARM) template. The current version of Azure CLI has a bug that doesn’t accept environment variables with special characters. The ARM template is available as a Gist on Github. Don’t forget to replace the variables with actual values obtained from the previous steps.

After the ACI instance is launched, access the application through the public IP address of the instance: 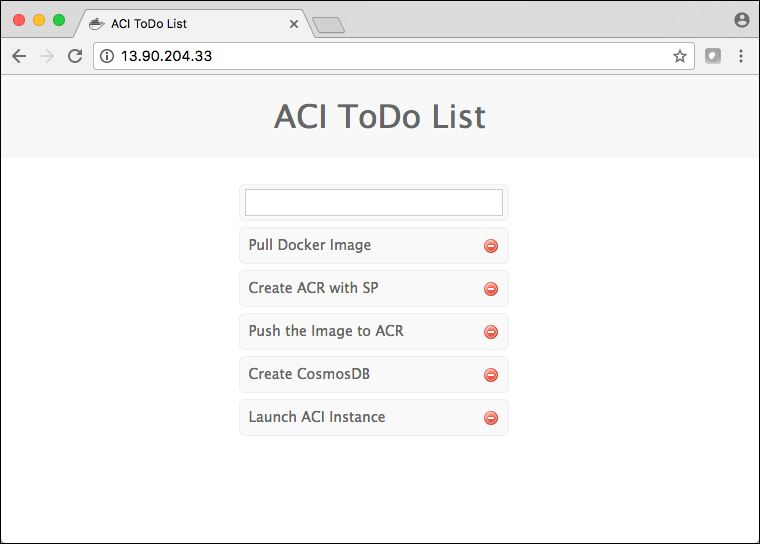 After entering a few todos in the web UI, check out the creation in Azure CosmosDB. You can use the Data Explorer in the CosmosDB blade in Azure Portal. It should show the collection and the documents created by the application:

Finally, check out the details of the ACI and the logs with the following commands.

All the commands used in this tutorial are available as a Github Gist.

The objective of this tutorial is to demonstrate the usage of ACR, ACI, and Azure Cosmos DB. While you may need Azure Container Service (ACS) for orchestrating and managing multi-container workloads in production, ACI offers a simple mechanism to run stateless applications based on a single container. By taking advantage of Azure Storage and Azure CosmosDB, we can isolate the state into a durable and persistent service, which can be shared among multiple containers running within ACI and ACS.

In the next part of this series, we will extend this use case to a multi-container deployment scenario utilizing the ACI Connector for Kubernetes. Stay tuned!