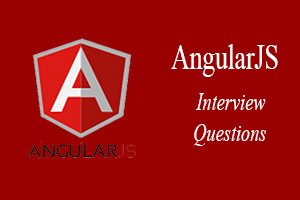 AngularJS, the ‘Swiss army knife’ of the developer community, has been seeing exponential growth in popularity and career opportunities in the recent years. No surprises there, as the development framework is known for its ability to create single-page web applications that encompass three critical components – speed, agility and a strong community backing it up. AngularJS continues to dominate the arena of Javascript framework and has proved itself to be a worthy investment for web developers who seek to fast-track their career. To help you get started, we have compiled a list of the most frequently asked AngularJS interview questions that will help you ace the AngularJS interviews that come your way.

1. What is the difference between Angular and jQuery?

2. Name the key features of AngularJS?

The key features of AngularJS are:

According to AngularJS.org, “Data-binding in Angular apps is the automatic synchronization of data between the model and view components. The way that Angular implements data-binding lets you treat the model as the single-source-of-truth in your application. The view is a projection of the model at all times. When the model changes, the view reflects the change and vice versa.”

There are two ways of data binding:

4. What are directives in AngularJS?

A core feature of AngularJS, directives are attributes that allow you to invent new HTML syntax, specific to your application. They are essentially functions that execute when the Angular compiler finds them in the DOM.  Some of the most commonly used directives are ng-app,ng-controller and ng-repeat.

The different types of directives are:

5. What are Controllers in AngularJS?

Controllers are Javascript functions which provide data and logic to HTML UI. As the name suggests, they control how data flows from the server to HTML UI.

6. What is Angular Expression? How do you differentiate between Angular expressions and JavaScript expressions?

Angular expressions are code snippets that are usually placed in binding such as {{ expression }} similar to JavaScript.

7. What is the difference between link and compile in Angular.js?

Read More:   How to make an app like GrabTaxi?

8. What are the characteristics of ‘Scope’?

Scope is an object that refers to the application model. It is an execution context for expressions. Scopes are arranged in hierarchical structure which mimic the DOM structure of the application. Scopes can watch expressions and propagate events. The characteristics of Scope are:

9. What are the advantages of using Angular.js framework?

Angular.js framework has the following advantages:

10. What is the difference between AngularJS and backbone.js?

11. Explain what is injector in AngularJS?

An injector is a service locator, used to retrieve object instance as defined by provider, instantiate types, invoke methods, and load modules.

12. What is factory method in AngularJS?

Factory method is used for creating a directive.  It is invoked when the compiler matches the directive for the first time. We can invoke the factory method using $injector.invoke.

Syntax: module.factory( 'factoryName', function );
Result: When declaring factoryName as an injectable argument you will be provided with the value that is returned by invoking the function reference passed to module.factory.

14. Does Angular use the jQuery library?

Yes, Angular can use jQuery if it’s present in the app when the application is being bootstrapped. If jQuery is not present in the script path, Angular falls back to its own implementation of the subset of jQuery that we call jQLite.

15. Can AngularJS have multiple ng-app directives in a single page?

No. Only one AngularJS application can be auto-bootstrapped per HTML document. The first ngApp found in the document will be used to define the root element to auto-bootstrap as an application. If another ng-app directive has been placed then it will not be processed by AngularJS and we will need to manually bootstrap the second app, instead of using second ng-app directive.

16. Can angular applications (ng-app) be nested within each other?

No. AngularJS applications cannot be nested within each other.

17. What is internationalization and how to implement it in AngularJS?

18. On which types of component can we create a custom directive?

AngularJS provides support to create custom directives for the following:

19. What is $rootscope in AngularJS?

Every application has a single root scope. All other scopes are descendant scopes of the root scope. Scopes provide separation between the model and the view, via a mechanism for watching the model for changes. They also provide event emission/broadcast and subscription facility.

20. Can we have nested controllers in AngularJS?

21. What is bootstrapping in AngularJS?

Bootstrapping in AngularJS is nothing but initializing, or starting the Angular app. AngularJS supports automatic and manual bootstrapping.

22. What does SPA (Single Page Application) mean? How can we implement SPA with Angular?

Single Page Applications (SPAs) are web apps that load a single HTML page and dynamically update that page as the user interacts with the app. Since SPA the page never reloads, though parts of the page may refresh. This reduces the round trips to the server to a minimum.

It’s a concept where we create a single shell page or master page and load the webpages inside that master page instead of loading pages from the server by doing post backs. We can implement SPA with Angular using Angular routes. You can read up about SPAs here.

AngularJS lets us extend HTML vocabulary for our application resulting in an expressive, readable, and quick to develop environment . Some of the advantages are:

24. Is AngularJS compatible with all browsers?

25. How to implement routing in AngularJS?

It is a five-step process:

Feeling overwhelmed with all the questions the interviewer might ask in your AngularJS interview? It’s never too late to strengthen your basics. Learn from industry experts on how to use AngularJS in real life use cases via a structured course.