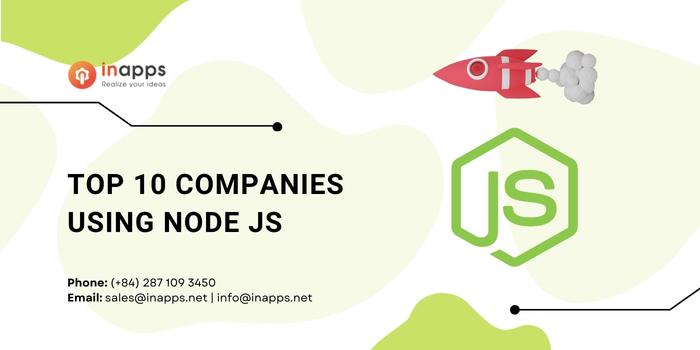 Despite of being arrived late on the scene, NodeJS is dominating the entire application development scenario with its great optimal features. This is a well-kept secret for the seamless distribution of their services that some of the top companies use NodeJS for its web-based applications today.

From concurrence to being a lightweight runtime, NodeJS has upended the development of large scale apps. The 2018 NodeJS survey report cited that 85% of the active users deploy it for Web apps.

NodeJs is an important JavaScript environment that is used in web development, especially for the server-side. Due to its versatility, many companies use NodeJS for developing their application and software, since it has become extremely important to provide good apps to their customers which are bug-free, glitch-free, and responsive.

Advantages of having a good mobile application

NodeJs frameworks are used for making applications for large-scale companies. It is supported by Operating systems like Linux, mac OS, FreeBSD, and Windows. It can be written in C, C++, and Javascript.

So, we will discuss companies that use NodeJS and why they decided to use it instead of any other language. 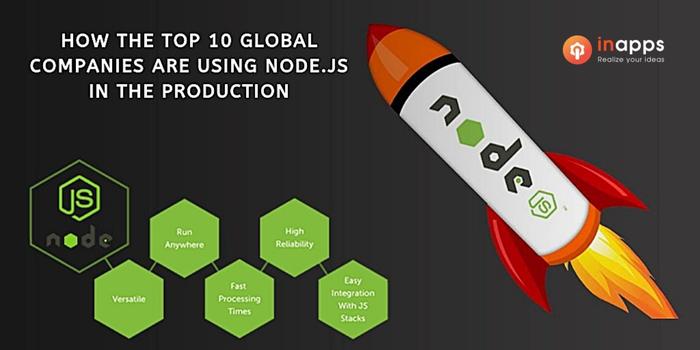 Since NodeJS is very effective for developing applications, many big companies use it as their primary Javascript code. Some of such companies are-

Netflix is an American media services provider and production company headquartered in Los Gatos, California, founded in 1997 by Reed Hastings and Marc Randolph in Scotts Valley, California. It is the leader of the OTT(Over-the-top) platforms all around the world. It generated a revenue of $20.156 billion in 2019.

Earlier, the company was using Java on the backend and Javascript for the frontend. This required the developers to be well-versed with both the languages.

Thanks to this, they had to do debugging and error removing twice, once for Java and once for JS. This was turning out to be costly for the company.

Taking everything in the calculation, Netflix decided to switch towards NodeJS, which was easy to use and reduced the amount of work done by developers and cost effective too.

Primary reasons for Netflix to use NodeJS are–

Trello is a web-based kanban-style list-making application which is a subsidiary of Atlassian. It is a project management tool that is used by more than 20 million people worldwide.

It’s easy to set up, due to which the team members can be on-boarded quickly, Trello is currently using NodeJS as its server-side script and prototyping tool to create a single page web application.

Users can create their task boards with different columns and move the tasks between them. Typically columns include task statuses such as To Do, In Progress, Done.

PayPal Holdings, Inc. is an American company operating a worldwide online payment system that supports online money transfers and serves as an electronic alternative to traditional paper methods like checks and money orders.

Node.js helps us solve this by enabling both the browser and server applications to be written in JavaScript. It unifies our engineering specialities into one team which allows us to understand and react to our users’ needs at any level in the technology stack.

Similar to Netflix, it was using Java as its backend and Javascript on the frontend. To test the compatibility of the software, they built a prototype with two developer teams using NodeJS and Java accordingly. The company ranked 204th on the 2019 Fortune 500 of the largest United States corporations by revenue

Linkedin is the world’s biggest recruiter platform. It operates via a mobile app as well as a website. It is mainly used for professional networking, including employers posting jobs and job seekers posting their CVs.

The backend of Linkedin was initially Ruby on Rails. But as time progressed, they noticed that its performance wasn’t that effective and had some scalability issues. The app, based on Ruby on Rails, was a synchronous app that allowed the clients to make calls through a single page. This was affecting its performance in a bad way.

On the other hand, the NodeJS app allowed users to make a single request per page, improving efficiency. Thanks to this, their traffic has almost doubled and the app loads 2 to 10 times faster on the client-side.

It is the world’s biggest hypermarket chain by revenue and the largest private employer with around 2.2 million employees. It had a revenue of $523.964 billion in FY2020.

The retail chain has benefitted a lot from the asynchronous operation of NodeJS in its mobile app. Thanks to it, the loading time of the app has come down a lot and the performance has improved a lot. Developers at Walmart can create APIs and deploy them in their apps in an instant.

The best thing about Uber is its matching system which creates a chain of notifications and sends it to the drivers closest to that request.

For making this system, they chose NodeJS due to the 3 crucial factors-

As a result, Uber now can process over 2 million remote procedure calls (RPCs) per second.

Nasa is an independent agency of the United States Federal Government responsible for the civilian space program, as well as aeronautics and space research Since its establishment, most US space exploration efforts have been led by NASA, including the Apollo Moon landing missions, the Skylab space station, and later the Space Shuttle.

NASA is supporting the International Space Station and is overseeing the development of the Orion Multi-Purpose Crew Vehicle, the Space Launch System, and Commercial Crew vehicles.

Like all the others mentioned in this list, NASA also uses NodeJS. But instead of using it for app development, it uses it to secure the lives of its astronauts. Due to one incident where the life of an astronaut came at risk because of some unreliable data hosted at many locations, the engineers decided to move towards a more secure path. So they decided to develop their own end-to-end secured data system. This brought a decline in loading speed by 300% and they have a single database for everything.

Mozilla Firefox is a famous open-source internet browser developed by Mozilla Corporation and Mozilla Foundation. It has a market share of 8.01% according to NetMarketShare, way behind Google Chrome, its prime competitor. Firefox was originally named Phoenix but the name was changed so as to avoid trademark conflicts with Phoenix Technologies.

It uses NodeJS for the following-

The primary reason that the company gave for choosing NodeJS was the memory footprint and cryptography.

The developers say that they faced difficulties in starting with Node but after these setbacks, they got all the stuff in a single JS repository, without being inclined on any other programming language.

Yahoo! is an American web services provider headquartered in Sunnyvale, California, and owned by Verizon Media. It is one of the pioneers of the internet in the 1990s. Initially, it was using NodeJS for small purposes like uploading files. But then they decided to expand their operations.

The biggest difficulty they faced in doing this was to maintain the same code on the client as well as the server-side and NodeJS turned out to be the best solution for this.

At its height, it was one of the most popular sites in the United States. According to third-party web analytics providers Alexa and SimilarWeb, Yahoo was the most widely read news and media website – with over 7 billion views per month – ranking as the sixth-most-visited website globally in 2016.

GoDaddy Inc. is an American publicly traded Internet domain registrar and web hosting company headquartered in Scottsdale, Arizona, and incorporated in Delaware. As of April 2020, GoDaddy has approximately 18.5 million customers and over 7,000 employees worldwide. They also host and manage more than 77 million domains.

GoDaddy’s website builder was initially written in C# and SQL server. But in 2016, they migrated it to NodeJS-based Cassandra NoSQL This allowed them to reduce the number of servers by almost 10 times and reduce Time to First Byte(TTFB) from 60ms to 12ms.

When you have a few parallel projects — like we all have — you can host multiple sites in the same Apache server. Not really a big deal. Now, let’s scale that a little more: let’s say you have 100 sites with multiple domains each. Then things start to get a little more complicated for you to manage, and probably you will have to manage multiple servers as a single one may not handle all the traffic combined

Antonio Silveira, GoDaddy VP Engineering, when asked about using Node instead of Apache.

Companies use NodeJS find it better at everything as it is cost effective and takes less time for development. Node.js is a full package which is filling the gaps left by other frameworks in application development.

As a result, future of NodeJS seems very bright. Many companies have switched towards NodeJS due to its nice handling and performance. Before NodeJS, companies used Java and other languages to develop server-side and client-side frameworks. This used to be a tiresome work.

But with NodeJS, this has all become very easy to handle. Since it is also being used for making IoT apps, we can see some new changes in IoT. It can also be used in many areas like social media, payment processing, and E-commerce.