People utilized desktop apps before online apps were popular. Web-based solutions appear to have steadily driven them out; yet, there has lately been a resurgence in the popularity of desktop application development.

Trello, Azure, and Wrike are three of the most prominent webbase projects that have begun to migrate to desktops.

Web applications and mobile applications will dominate the industry in 2022. Consequently, companies and individuals will rely less on desktop computers than now because we will all access most things through our phones.

However, individuals continue to create desktop applications for a variety of reasons.

This post will teach you how to develop a desktop application in 2022. This tutorial is for you if: 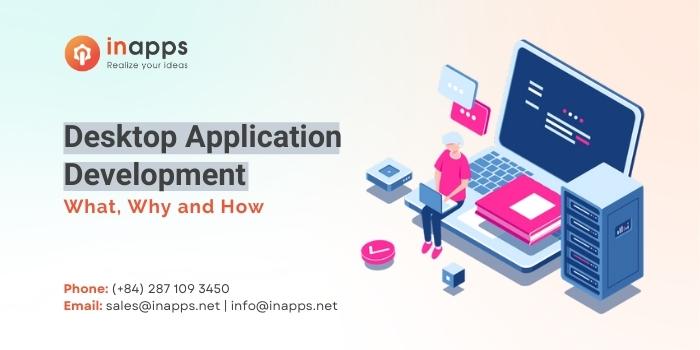 All about Desktop application development

What is the desktop application?

Desktop applications, as opposed to web-based or mobile apps, are software programs that interface with the operating system. They may be any software that runs on a desktop computer and has a user interface for input and output.

Desktop apps are typically utilized in a single location; however, they may include a “system tray” icon that remains visible on the screen. The word is also used to describe a program that exclusively runs on the desktop and is not accessible via a browser or other methods.

Some desktop apps, such as word processors and media players, allow you to complete various duties, but others, such as gaming apps, are designed to amuse.

Some examples of desktop apps are: 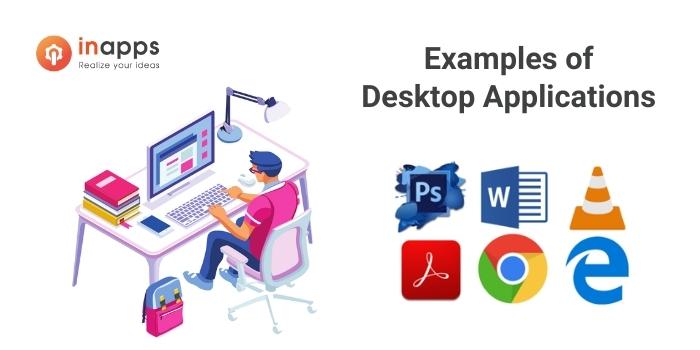 What is desktop application development?

Desktop application development is the process of how developers create apps for use on desktops and laptop computers. These applications are often designed for Windows, macOS, Linux, and other desktop operating systems.

Desktop programs do not require an internet connection to function and must be downloaded and installed on the user’s computer.

Desktop apps can be written in various languages, including C/C++, Java, Python, Ruby on Rails (ROR), PHP, Perl, and others, and are often built using libraries such as Qt or GTK+.

Why should you develop desktop apps instead of mobile apps?

Creating desktop software rather than a mobile app may appear to be an old-fashioned notion, but it is the future!

Nowadays, more individuals spend their online time on desktop computers rather than smartphones; thus, the need for desktop apps has never been greater.

There are several reasons why you should create a desktop app rather than a mobile app, including:

Use Cases for Desktop Frameworks

Before identifying the most remarkable frameworks, we must ask ourselves the following question: What are some of the applications these frameworks can build? To help you get started, here is a list of some of the things you can make with desktop app development frameworks:

Choosing the best framework to employ as a desktop app is never easy. Aside from only examining the characteristics of a given framework, you must also recognize the benefits and drawbacks of using that framework.

Here are the best frameworks for desktop application development to consider: 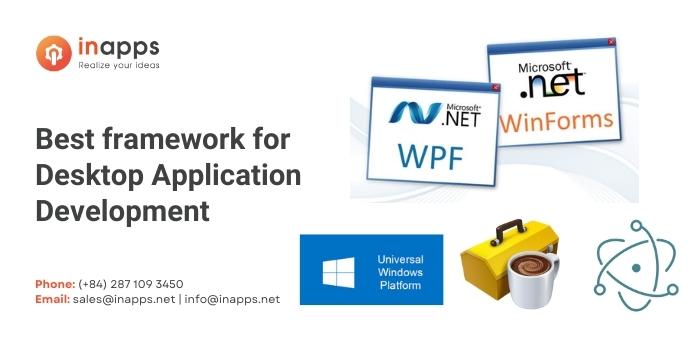 Windows Presentation Foundation, or WPF, is a framework within the .NET framework mainly used to generate desktop application visuals. You will utilize it to create a software user interface.

Since its introduction to .NET in 2006, WPF has won the hearts of many programmers. The WPF runtime libraries are often installed in the Windows operating system.
WPF’s ability to connect various user interface components is a critical feature. Vector graphics, adaptive documents, pre-rendered media objects, and 2D and 3D rendering are among the elements.

Electron is a cross-platform programming framework created by GitHub. This framework makes use of Node.js and is a good alternative for developers wishing to build desktop apps that run on macOS, Windows, and Linux.

Many prominent organizations, including Facebook Stack and Microsoft, use this platform to construct their products. Web developers may also create applications using Electron because they do not require specific expertise or experience from other platforms. The ability for web developers to use an existing JavaScript codebase while adding new functionality will play a vital role in increasing product productivity.

There is an intriguing framework that has helped to make the .NET platform famous for desktop application development. It’s known as Universal Windows Platform, and it enables developers to create cross-platform programs.

The Universal Windows Platform (UWP) will allow developers to create programs that can operate on various Microsoft-owned devices.

This means that your program will be able to operate on a variety of platforms. This is made feasible via a Windows program development-specific algorithm.

WinForms is a class library that has existed since creating the .NET desktop framework. It was intended to replace the Microsoft Foundation Class Library (MFC), but it currently serves as an event-driven layer platform.

A desktop application written in .NET using WinForms is regulated by events, which means that all visual elements are derived from underlying control classes and are awaiting user input before proceeding.

Cocoa software is a native framework for developing native macOS applications. It is an object-oriented framework used to create user interfaces for macOS, iOS, and tvOS. It improves the UI’s functionality and makes it more appealing. However, developers will need to employ Apple’s development tools to create apps using the Cocoa framework.

There are several desktop app development frameworks available. It all relies on the operating system you want to use and the type of software you wish to utilize. 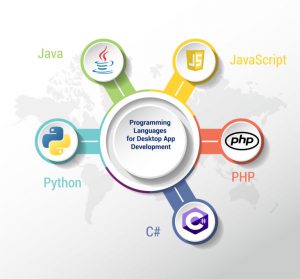 Microsoft Corporation invented C#, a sophisticated, type-safe, object-oriented programming language. Despite its origins in the C family, it will be familiar to JAVA and JavaScript programmers. Because Microsoft develops C# and Windows developers can easily create Windows-based desktop software. Furthermore, C# enables developers to design a wide range of robust and secure programs that run on the .NET platform.

C++ is a general-purpose, procedural programming language with system resource management capabilities. It may be used for desktop programs and more interactive apps such as browsers or games. Eclipse, NetBeans, Qt Creator, Visual Studio (VS), XCode, and other IDEs can be used by programmers to edit the source code of C/C++ programs.

Python has recently become one of the most popular programming languages. It’s used in machine learning, website development, and software testing. Furthermore, Python is a general-purpose language, which means it was designed to be utilized in various applications, such as data research, software and web development, automation, and general task completion.

Java is a high-level programming language mainly used to create computer applications. Because it was supposed to be “a better C,” its syntax is comparable to C and C++. Object orientation, modularity, strong typing for variables and constants, exception handling for error management, and threads for concurrent programming are just a few of the aspects that make Java useful in software development. A current version of Java features lambda expressions, which simplify coding.

JavaScript is a computer language that was created to aid in the creation of web pages. It is utilized in many standard web browsers and is responsible for the interactive elements seen on most web pages.

PHP is a general-purpose programming language used to produce dynamic content and databases. Furthermore, PHP is sufficiently strong to serve as the foundation of a complete blogging system (WordPress), deep enough to power an extensive social media network (Facebook), and easy enough for novices to master.

It has emerged as the ideal option for developers looking to create desktop applications. Nonetheless, you may utilize Nighttrain, PHP Desktop, WXPHP, or TideSDK to create cross-platform desktop apps using PHP.

In 2014, Apple released the complete Swift programming language. It is a multi-paradigm, general-purpose compiled language focusing on safety and readability. The Swift team’s objective is to provide an environment where programmers can write code with fewer mistakes than other languages allow.

Swift has been used effectively to create various iOS apps, including Siri, Keynote, Pages, Numbers, and many others. Playgrounds, one of its most powerful features, allows developers to execute their code without first compiling it!

Red is a strong, reactive, and functional programming language created to address the shortcomings of REBOL (Relative Expression Based Object Language).

Google created Go, an open-source programming language. It’s quick, easy, and compiled. It has also been utilized to develop technologies such as Docker and Kubernetes. But what is it about Go that makes it so unique?

Go is a computer language that is classified as “systems programming.” It may be used to write low-level programs for web servers, operating systems, and other things that aren’t often associated with desktop applications. This makes it ideal for developers that want to concentrate on speed rather than worrying about their app’s user interface all of the time.

Go has some great features, including built-in parallelism (so that numerous jobs may execute simultaneously) and garbage collection.

Object Pascal is a Pascal extension that provides object-oriented programming concepts such as methods and classes. It is compiled into native, type-safe, and fast code. Not only that, but object pascal can be used to create programs for Linux, Windows, and macOS all at the same time.

Delphi and Free Pascal are two of the most popular object Pascal implementations. Lazarus, Oxygene, and Firemonkey are some of the powerful frameworks you will need while designing desktop programs with Object Pascal.

Desktop application development is a kind of software development that develops apps for use on the desktop. The most typical use case for these programs is business-related, and they feature functionality such as word processing, spreadsheets, and project management tools.

At InApps, we provide a wide range of app development services. Visit our official website for additional information or fill your needs in the contact form below to get a consultation.