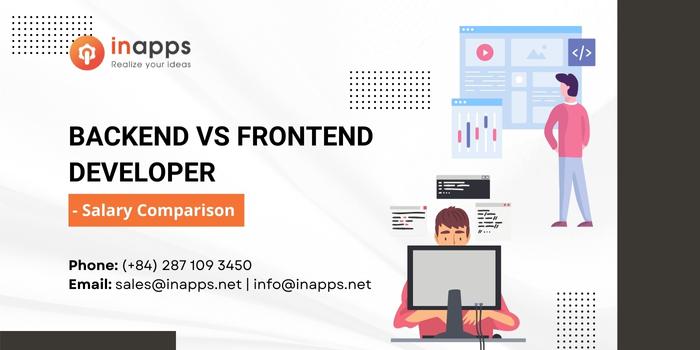 We use data from authoritative websites like Indeed.com, Payscale, and Glassdoor to conduct detailed research on back end vs front end developer salaries. So, let’s dive into facts and comparisons!

A front-end and a back-end developer don’t get the same salary. Even two programmers with similar technologies do not have the same wages. A range of factors like experience and skillset determine how much programmers earn.

Who is a Front end Developer?

The role of Front end Developers

Whether you’re making a website, mobile app, software, or game, you will always need a front-end developer to visualize your ideas. With the help of a UX/UI and web designer, front-end developers will create that visualization with which your users will directly interact. 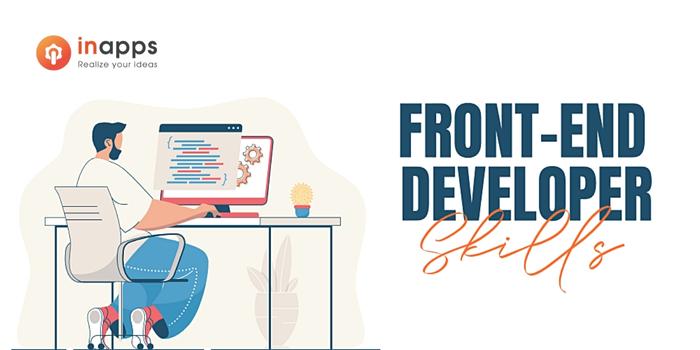 All front-end developers know how to use CSS and HTML. These are the foundations of web development for building the structure and style of any website or app.

Different programming languages are used for web development. Software engineers who are familiar with JavaScript frameworks are also in demand for building interactive experiences. But as the core JavaScript is not enough to create a fast and competitive website, some frameworks are more commonly used nowadays — AngularJS, ReactJS, BackboneJS, jQuery, NodeJS.

A skilled front-end developer should also be experienced in AJAX, JSON, and Websocket.

Moreover, front-end developers should stay updated on the latest UX/UI design trends, as they collaborate with the designers directly to create the best user experience of the software, website, or mobile application.

How much does a front end developer make in the US?

These numbers show what web developers earn for their work. Employers must also pay for benefits and allowances if they hire an in-house software developer. They will also have to provide resources like tools and desktops that cost money.

However, hiring freelance programmers or remote software developers will not need you to pay such extra benefits. But when you hire a software development team from the outsourcing agency, they will definitely offer higher costs because they include those additional expenses in their prices. 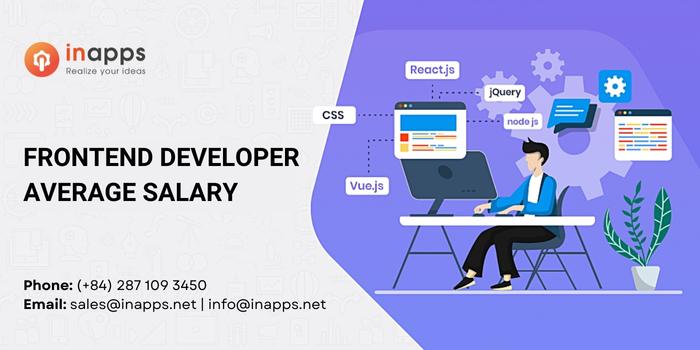 How much does a front end developer earn?

Read More:   A Discussion About Chaos Engineering and More – InApps 2022

The above data has been compiled from Indeed, and remember, it is only the average salary of a web developer, without additional expenses.

You will also notice a difference in average salaries as you shift locations within the US. Software engineers in some areas like California, Washington, and New York earn more than the programmers in other locations.

According to Indeed.com, front-end programmers earn 20% more than the national average in California, while developers in New York earn 7% more.

Here are the average salaries you will need to pay to web developers per year across the US:

The USA has some of the highest salaries for front-end developers. In comparison, if you decide to outsource front-end web development or web design, you have more options to choose from. You can hire software engineers with the same or better quality, same programming language skillset, but at lower prices.

Here are the average salaries of front-end developers across different top outsourcing destinations, according to Glassdoor. 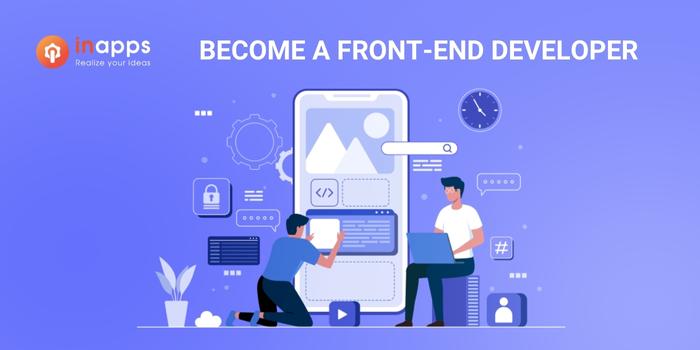 Is front end development in demand?

Software engineers with specific skills and technology expertise are more in demand. Depending on the technologies and programming languages that are commonly used, the number of developers that can be in demand, and some skills can be paid higher. According to Indeed.com:

Who is a Back end Developer?

The Role of Back end Developers

Back-end developers work on the server-side of software and apps. They write code that helps apps exchange information with the database. Back-end programmers work with server logic, integration, APIs, and several other back-of-the-screen processes.

Additionally, they incorporate what front-end developers do with the client-side. 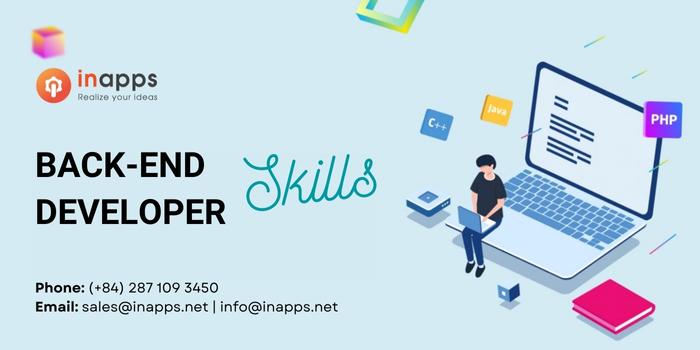 Working with APIs also pays off, as 66.5% of developers plan to expand the use of APIs in 2022. Popular technologies related to API are JSON and AJAX.

Moreover, it pays to have a basic understanding of front-end technologies like HTML and CSS. It helps back-end developers understand the process deeper from both the client and server sides.

Then, they look for a candidate with a matching technical skillset. So, you will not find any programmer who knows everything out there, as it’s pretty unrealistic. But a skilled developer can always pick up a new programming language or framework in less time than a junior programmer.

How much do back end developers make in the US?

In comparison, the average salary of a back-end developer is higher than a front-end developer. According to Indeed.com, average back-end programmers in the US earn $114,969 yearly. Additionally, they get an average bonus of $4,000 per year.

But remember, you will need to pay additional benefits when hiring an in-house programmer. You will also need to provide resources like a desktop and tools for software development. Some of employers also cover health insurance and retirement plans.

You will not need to pay any allowances or benefits if you hire a remote software developer. However, you may need to pay the charges for using a freelance hiring platform. And if you hire programmers with an outsourcing agency, the cost will be higher, too. 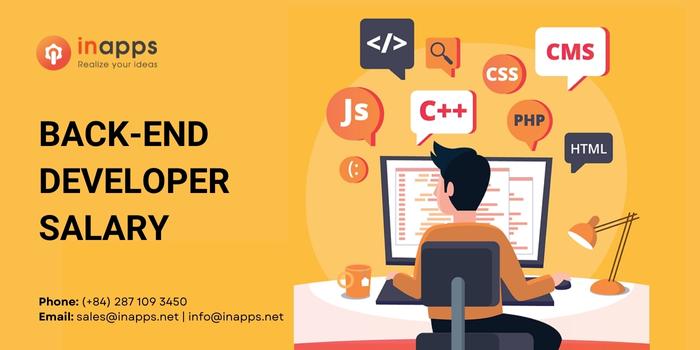 The salaries of back-end developers range depending on the experience and job title – the same way they range regarding front-end web developers. Let’s explore how much you will need to pay a programmer based on their working experience and career path, according to Payscale:

Qualified engineers with solid experience and management skills can earn up to $130,000 per year (+bonuses).

Back-end developer salaries vary highly based on where they are located. And if you hire lower-salary programmers from the country, you can save your costs.

If you are looking for a US developer, back-end developers in California earn 11% more than the national average, according to Indeed.com. Developers in Colorado make 10% more, while those in Washington get 5% more salary.

Here are the average salaries of back-end programmers across the US, as per Indeed.com:

Below are the salaries of back-end developers in leading outsourcing regions:

Outsourcing may be a cost-effective choice for US projects due to high salaries. You can save more and access global talent by hiring a remote programmer.

Is there a difference between Web Developer and Mobile Developer Salaries?

Website and mobile app development are two different projects with different processes and requirements. So, can mobile and web developers earn the same salaries?

Web developers from the US have an average salary of $73,601. Of course, it also depends on the experience and skills of the developers.

In comparison, a mobile developer can earn $118,768 in the US. The reason is, that sometimes mobile developers attend to both front-end and back-end responsibilities and demand higher pay.

Software developers who try to acquire the latest skills and demanding programming languages earn more than their colleagues. Back-end engineers can earn more by taking up the following skills, as reported by Indeed.com:

When you will look for a developer for hire and consider the difference in developers’ salaries according to different hiring models, here is a table that can help you understand the average rates you’ll have to pay for freelance developers, and full-time contractors from outsourcing agencies, and in-house US engineers.

Read More:   DevOps, DevApps and the Death of Infrastructure – InApps 2022

It’s important to understand that the final cost mostly depends not on the developers’ rates, but on the additional costs of each hiring model.

Front-end development is referred to as the client-side instead of the back-end development, which works with the server-side of the application. The most common back-end programming languages include Java, Ruby, Python, PHP, .Net. The most popular front-end languages are HTML, CSS, and JavaScript.

When front-end programmers help you build your user interface and all the interactive features, back-end developers will handle the server-side of things and background processes by adding all functionality.

But if we are talking about the software development market, there are 660 open vacancies for front-end developers in New York, and 631 developer jobs for back-end engineers, which means that both roles are in demand. 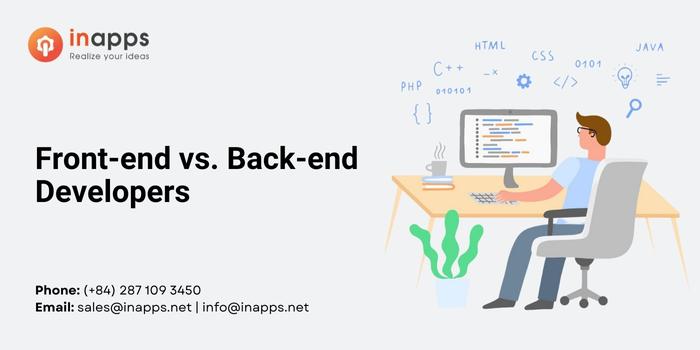 Does front end or back end pay more?

Comparing back end vs front end developer salaries is essential when hiring the right talent for your software development needs. You may need to pay up to $155,761 yearly in salaries to your front-end developer.

Additionally, your pay will also include benefits and bonuses, expenses on hiring and onboarding processes, and different tools and equipment. The salary of a back-end developer may be as high as $165,000 annually in big US cities.

You can also consider full-stack development, which may be a more cost-effective solution. The salary of your developer will also vary based on their location and experience.

After learning all this data, you can compare and analyze different specialists and understand which engineers you want to hire and where to look for them.

Lastly, share your project and budget. InApps will find the matching candidates in 48 hours or less.

List of Keywords businesses find our service on Google