Pre-COVID-19, the merchandising culture at the Target retail chain had a very siloed decision-making process and operations, only focusing on what’s best for each “unique” division or category, not concerned with what was best for end-to-end operations or customers.

Over the last four years, the company worked to change this state of operations, and the pandemic actually helped to speed the process.

With 350,000 employees, 1,914 stores, 46 distribution centers, and $93.5 billion in revenue last year, Target is one of the largest retailers in the North America. In 2014, folks from Target spoke at the DevOps Enterprise Summit (DOES) about how to rebuild engineering excellence in an organization that had previously outsourced almost everything. Gene Kim said it inspired part of his famous “The Unicorn Project.” In 2018, the Target team was back talking about rethinking the role of architecture and governance in enabling developer productivity.

Target employees spoke again at this year’s event, held last week. Luke Rettig, senior director of product management over merchandise capabilities, and Brett Craig, senior vice president of digital, took to the virtual stage to share Target’s journey over the last couple years and how the DevOps mindset is influencing not only technical work, but the entire organizational culture.

“When we had a pandemic, and had to focus on just getting the essentials while everybody was trying to figure out health and safety and work remotely, we were a lot more open. This is another opportunity for us to leverage the spirit of DevOps — putting just the experts together to make sure we’re focusing on things that only matter most.” — Brett Craig, Target

Target Pivots to a Learning-Led IT Organization

It all started around 2015, when Craig said that Target was struggling with technical operations. “Our spend as a rate of sales was too high. We had so many priorities that we were making so little progress on. And, on the rare occasion that we actually did deliver a project, our delivery model was mostly reliant on third parties, so we didn’t actually retain the IP [intellectual property].”

Read More:   What are Resources to Become a Developer in 2022

This all compounded morale and stability challenges. They were rooted in legacy ways of working, with a strong emphasis on outsourcing instead of developing technical skills within.

The technical management team flagged several weaknesses to be addressed:

“What are the things that we absolutely cannot miss and why is there all the other noise in the system?” Craig said they needed to lessen their risk posture and also rethink priorities. “There were a lot of things that were important to someone, but were they really important to all of us?” Often not.

While it eventually was a positive outcome, it was a painful start, with a very rough first holiday season and a drop in productivity. The Target team soon realized that they lacked critical skills in product, engineering, analytics and user experience.

In order to combat this, they allowed every engineer to spend 50 working days a year to invest in their own learning journey. This continuous improvement and modernization of technical skills led to powerful cross-team collaboration.

Next the Target IT team established architectural principles and governance boards, working to be intentional about their retail platform architecture. Their aim was to be loosely coupled but highly aligned via microservices and up-skilling. Mimicking Google’s site reliability engineering model, they made sure they weren’t just focusing on features and functions, but they were actually factoring operational health into those conversations, which Craig called the embodiment of a DevOps culture.

Agile and DevOps best practices were brought in across the massive organization, helping even non-technical teams to:

Back in 2018, Target was unable to keep high-quality perishables in stock, to the point that, while it attracts customers to the store, management questioned if they should continue it long-term, especially against increasing competition. It’s a substantial part of the Target business model, but, as Craig said, it was underperforming in all of its core metrics.

They began by throwing more management layers at the problem as well as hiring a 50-person consulting team to come in and fix it.

That sent them in the wrong direction. They realized they needed fewer people, not more.

They switched tactics to a small, cross-functional internal team of business, operations, tech and product that only focused on a specific set of deliverables. Buyers, planners, space allocators, vender liaisons, and other functional experts were co-located with Rettig and a couple engineers — “to communicate person-to-person, not Powerpoint-to-Powerpoint.”

They worked in sprints, kanban boards, and fast feedback loops, and they set a guardrail: Drive profit without sacrificing sales in the fresh businesses, including the deli, bakery, and perishables.

The new cross-functional capabilities team worked on a limited scope of deliverables, particularly around space, the most constrained asset in a brick-and-mortar. They strived to become very data-driven, particularly about the level of segmentation and localization they could go into for each of the nearly 2,000 stores. They worked to leverage data and intelligence to determine how much space each category should get before getting diminishing returns on profit. They also aimed to reduce mechanical shrink — sending more to the store than what they can sell before it spoils.

Perhaps the most successful part of this pilot project was its spawning of the first internal advocates for the DevOps way of working, which later allowed Target to respond quickly to the pandemic while protecting the health of team and customers.

Craig said they found that “By empowering a small group of people across the organization, it helped actually drive through some of the uncertainty and new challenges that we encountered every day.”

Rettig said weekly cross-organizational meetings were much more celebrations of individual team accomplishments, without the intersection of how these teams could work better together. And this meeting was separate from the weekly operations meeting. Often decisions would be made that were then just sent over to product and marketing to deliver on them, without cohesive intent.

Suddenly in March and April 2020, there was a supply chain delay in delivering essentials like food, while department stores everywhere had stockpiles of apparel and accessories in stores and distribution centers.

The still rather new capabilities team looked to orient themselves around the merchandising value chain and its critical path, including setting strategy, allocating space, deciding assortment, and how do they manage in-store change.

Rettig called it a stand-up at scale: “This was our business owners from across this value chain really coming together and saying what is the best decision for us to make for our team and for our guests,” which is how Target refers to its customers.

Read More:   Update Pancakes, Spatulas and Why Abstracting Data Is the Next Frontier

This called for a total enterprise mindset shift. Including the addition of another DAM meeting — or daily action meeting — aimed at protecting team members from all the unnecessary noise that distract from safely servicing customers. Interestingly, while they met daily to make quicker decisions, they also shifted strategy away from quarterly results and towards planning for what’s best for customers and staff in two-year, long-term objectives.

Craig said the team was continually tasked with asking: “What’s the right way to approach this without assuming or defaulting to how we’ve always approached things?”

Rettig’s team paused a huge number of clearance programs and seasonal transitions set to start in those early weeks, to take that re-ticketing burden off the team. He explained that these are considered huge enterprise decisions that were able to be made in that cross-functional DAM meeting. And for the first time they leveraged the Target Circle loyalty app to run instant promotions on the overstocked non-necessities. 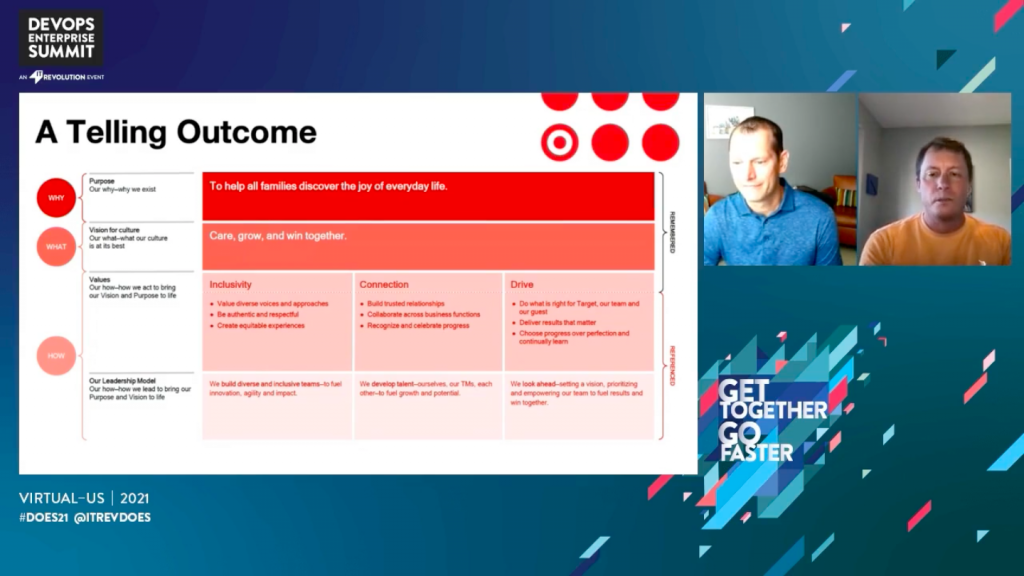 Craig said that this took the embracing of a true DevOps mindset — rallying across different teams for a single purpose — most of who didn’t even know what DevOps actually is.

This capabilities team worked toward the purpose “to help all families discover the joy of everyday life” and the vision to “Care, grow and win together.” Target adopted from this three new values that helped achieve this:

As they streamlined, everything outside the value chain was cut. 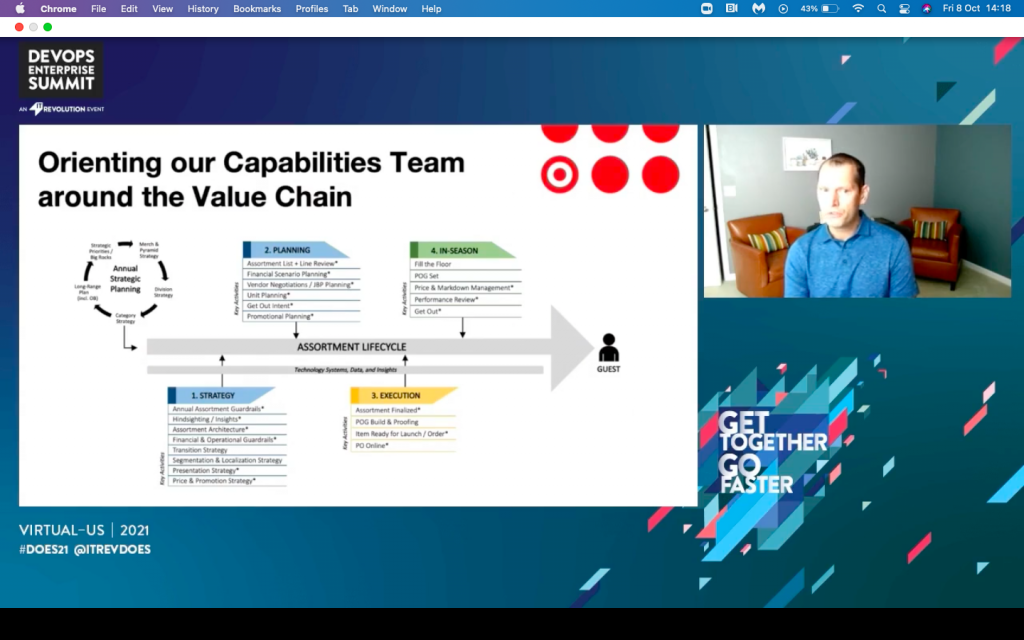 Target’s Next Steps Toward Digital

During his DOES hosting, Kim said that the conference goal was clear: “We’re all trying to piece together the body of knowledge about tech culture.” That’s why his team asked each speaker to end with what they don’t know yet or what they needed help with.

Craig, who was recently promoted at Target to run the full digital business, said that, for many parts of the world, digital has become the gateway to retail, however, the U.S. is behind that curve.  In order to catch up, Target digital is focusing on maturing in its product thinking and in driving the spirit of DevOps across the whole massive organization.

Most importantly, they emphasized that Target is hiring across all disciplines.