Forget developers, today’s kingmakers are called architects, and studies continue to indicate that different technologies are adopted if architects’ preferences are followed.

A prime example is databases. Architects usually choose the database technology used for new applications at 41% of organizations according to Percona’s “2020 Open Source Data Management Software Survey.” Developers make these decisions at 26% of organizations, while only 16% of database administrators (DBAs) have the responsibility. People can perform multiple job functions, so some developers architect the same databases they manage, and some DBAs with programming skills are morphing into so-called data engineers. As career arcs change, perhaps people will self-identify with the architect job title because those are the people that are the decision-makers. 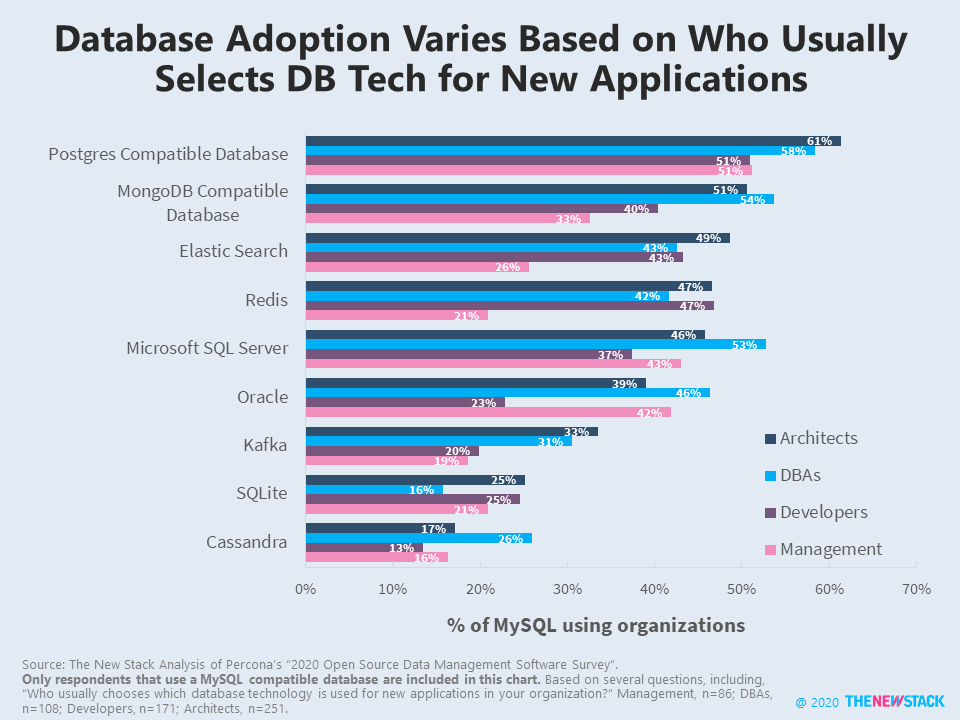 InApps conducted a custom analysis of the Percona study’s data set to see which databases are preferred by different job roles. Percona has long provided a commercial version of MySQL, so unsurprisingly 91% of organizations surveyed utilize a MySQL compatible database. For this reason, we filtered based on these criteria to create a chart showing how the adoption of databases varies based on who tends to be responsible for choosing the data technology for new applications.

Oracle and Microsoft SQL Server is used less often at organizations where developers usually choose database technologies. DBA-centric organizations are most likely to be using these two non-open source options, but many architects also appear to work at places with these legacy footprints. Interestingly, DBAs appear to prefer Cassandra more often, but this may be the result of a large number of Cassandra open source community contributors participating in the survey.

The adoption of several databases is much lower at organizations where management makes technology decisions. This sub-set of respondents may not consider data stores Redis, Elastic Search and Kafka when thinking about databases. Another explanation is that these technologies are just not on their radars.

Data from the survey also indicates that organizations are less committed to using one open source DB technology over another when architects are in charge of selecting the technologies for new applications. One reason may be fewer opportunities to be influenced by developers and DBAs in their workforce that may favor an open source project that they contribute to.

On a more macro level, Lightbend’s “Cloud Native Adoption Trends 2020-2021” provides clues about what architects are looking for. Compared to developers, architects believe their organization prioritizes performance and resilience over new application features. While they want interoperable technology frameworks, architects are always on the look-out for services that can be consumed via APIs. In contrast, two-thirds of software and data engineers prefer technologies they can personally configure and maintain.

Data engineers are at the center of the next generation of cloud native data infrastructure. Without trying to define exactly what the job role entails, let’s look at a few more data points from the 50+ Lightbend respondents with the job role. Fifty-five percent of data engineers described their cloud native infrastructure strategy as “aggressive adoption,” compared to 39% for the average respondent. Interestingly, data engineers were also more likely to have a majority of their primary applications or systems hosted in a private cloud — 31% as compared to 17% for the average respondent.

It appears that many data engineers had already been working with Hadoop and other big data systems that were operating in a private cloud. They are focused on moving infrastructure to a cloud provider, with 35% saying this is the most important aspect of moving to “cloud native” as compared to only 20% of architects believing the same.

Stay tuned for the results of InApps’s own research, which highlights cloud architects’ unique point of view on IT requirements for new cloud services. 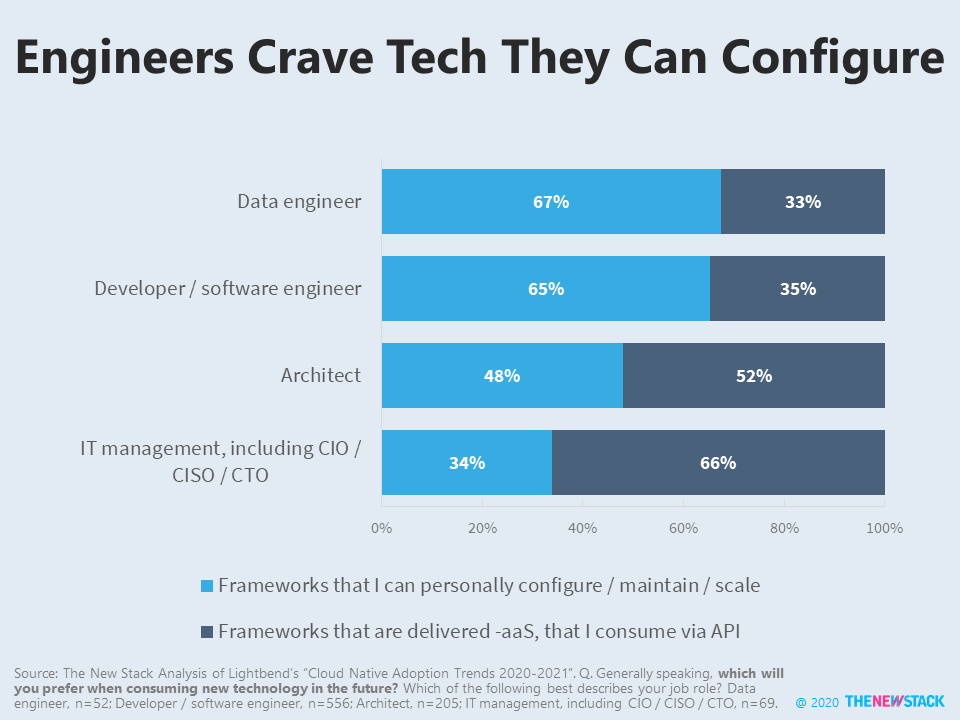 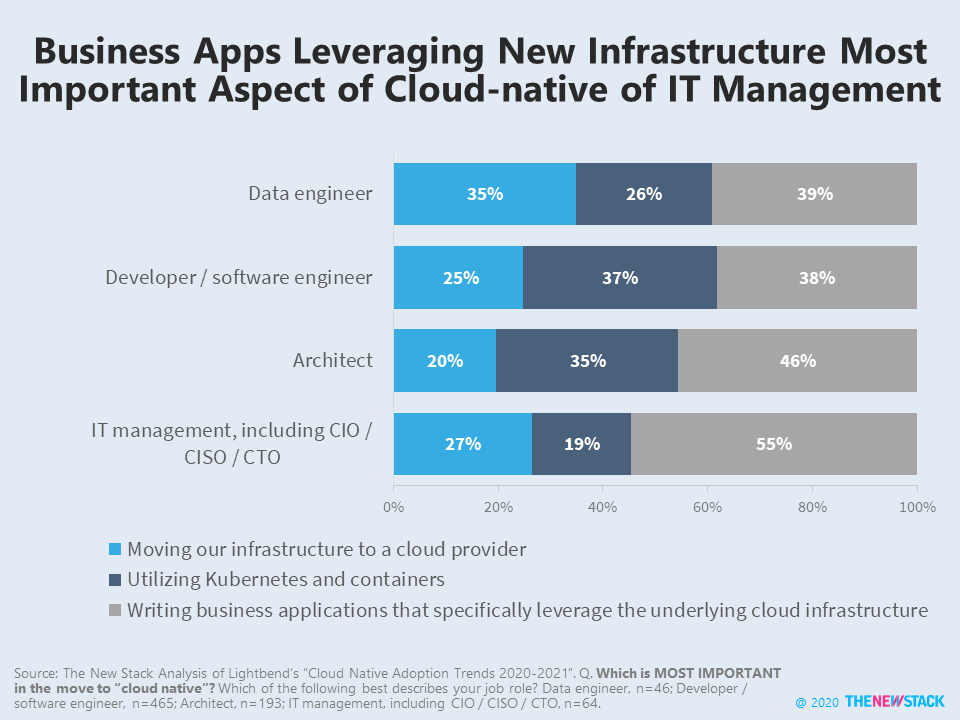 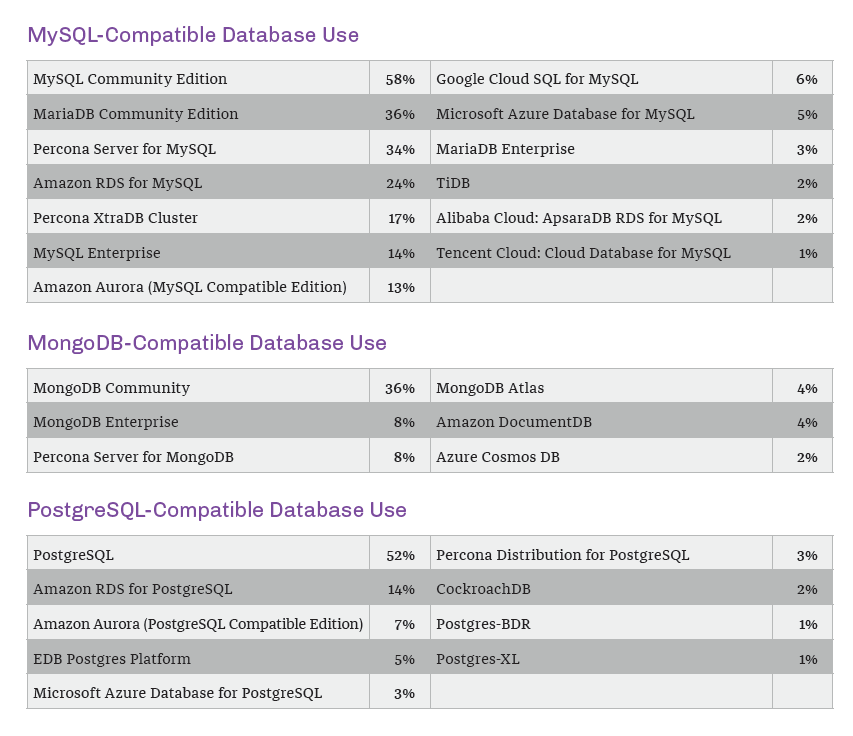