In this piece, you can learn more about how Arduino and InfluxDB work together for practical IoT applications. Arduino is open source and offers flexibility that works well with InfluxDB as part of a low-cost, straightforward architecture. 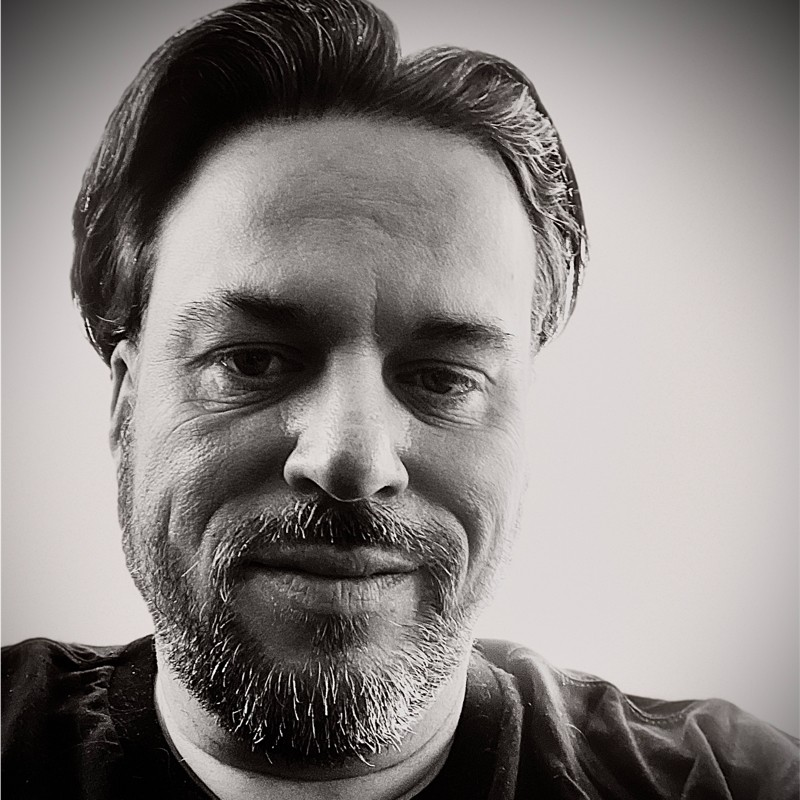 Brian Gilmore
Brian is director of IoT product management at InfluxData, the creators of InfluxDB.

Everything you would ever need to know about Arduino is very well documented on the official Arduino website: Arduino.cc

To summarize the information there, Arduino is an open source electronics platform. It is designed for ease of use and integration and includes tightly coupled software and hardware for myriad applications in IoT, industrial, and home laboratory environments. The key tenets of the Arduino architecture are its open source specification, cross-platform client support, simple programming language, low power requirements, and of course, its low cost per device. You can pick up an Arduino board for around $20 at any online electronics retailer.

The foundation of Arduino programming relies on relatively simple scripts, called “sketches.” These scripts are created in the Arduino Programming Language, which by most measures is a variant of C++. The Arduino IDE has good support for C, C++ and Arduino, but in many cases users may decide to program Arduino or their full IoT stack using a full-featured IDE like VS Code. Installing the Arduino and Flux extensions for VS Code opens the door to end-to-end development of Arduino, an IoT gateway, and time-series applications built on InfluxDB.

On top of the official Arduino hardware, there are dozens or more compatible boards from other microcontroller manufacturers. These boards are built around the open source Arduino hardware and software specification but may include additional out-of-specification features. Several popular boards from Expressif, including the ESP32 and ESP8266, fall in this category. For the purposes of this document, we will consider all Arduino-compliant boards the same.

There is a well-known Arduino library for integrating the ESP8266 with InfluxDB. InfluxDB is a contributor/maintainer of this library, and you can find references to it in Product wherever we present our SDK libraries, even, for example in our new notebooks interface.

This library presents a very good, straightforward method to send data from an Arduino to a local instance of InfluxDB. It also adds the capability to query data from that same local instance or InfluxDB. While the SDK supports direct writes to InfluxDB Cloud, there are better options to do this in production environments.

It is no issue to update a single Arduino when certificates expire, although the library currently ships with an ISRG Root X1 certificate good until 2035, but imagine managing a fleet of 50 or 100 Arduino-based IoT devices. Regular reflashing to replace direct-dialing instructions is not the best route. Skipping certificate validation is an option, but obviously not recommended for anything other than point-to-point home laboratory and prototyping.

Instead, it is common in IoT architectures to use a “gateway,” an intermediary device or application that acts as a proxy between the edge devices and external and cloud applications or services. A simple representation of this architecture: 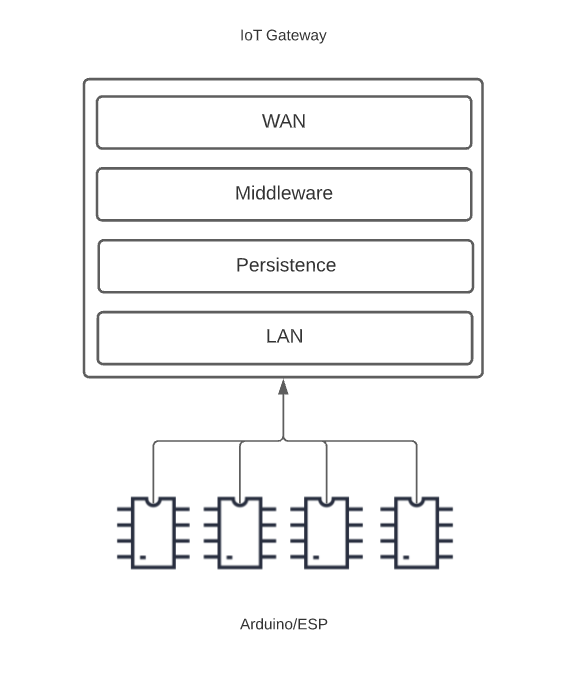 Centralizing the connections and communication for many edge controllers adds the following conveniences:

The good news is that you can use low-cost hardware like Raspberry Pi (~$35). There are also excellent “industrial-grade” IoT gateways from Advantech, Dell and others. Your main selection criteria are connection ports, processor selection and operating system. If you’re already programming in Arduino, you’re likely able to use the Linux-based Raspberry Pi, especially if you are prototyping or developing for home use.

Here are two basic architectures using this model for InfluxDB data collection — one using telegraf, the other adding local persistence with an edge-deployed InfluxDB: 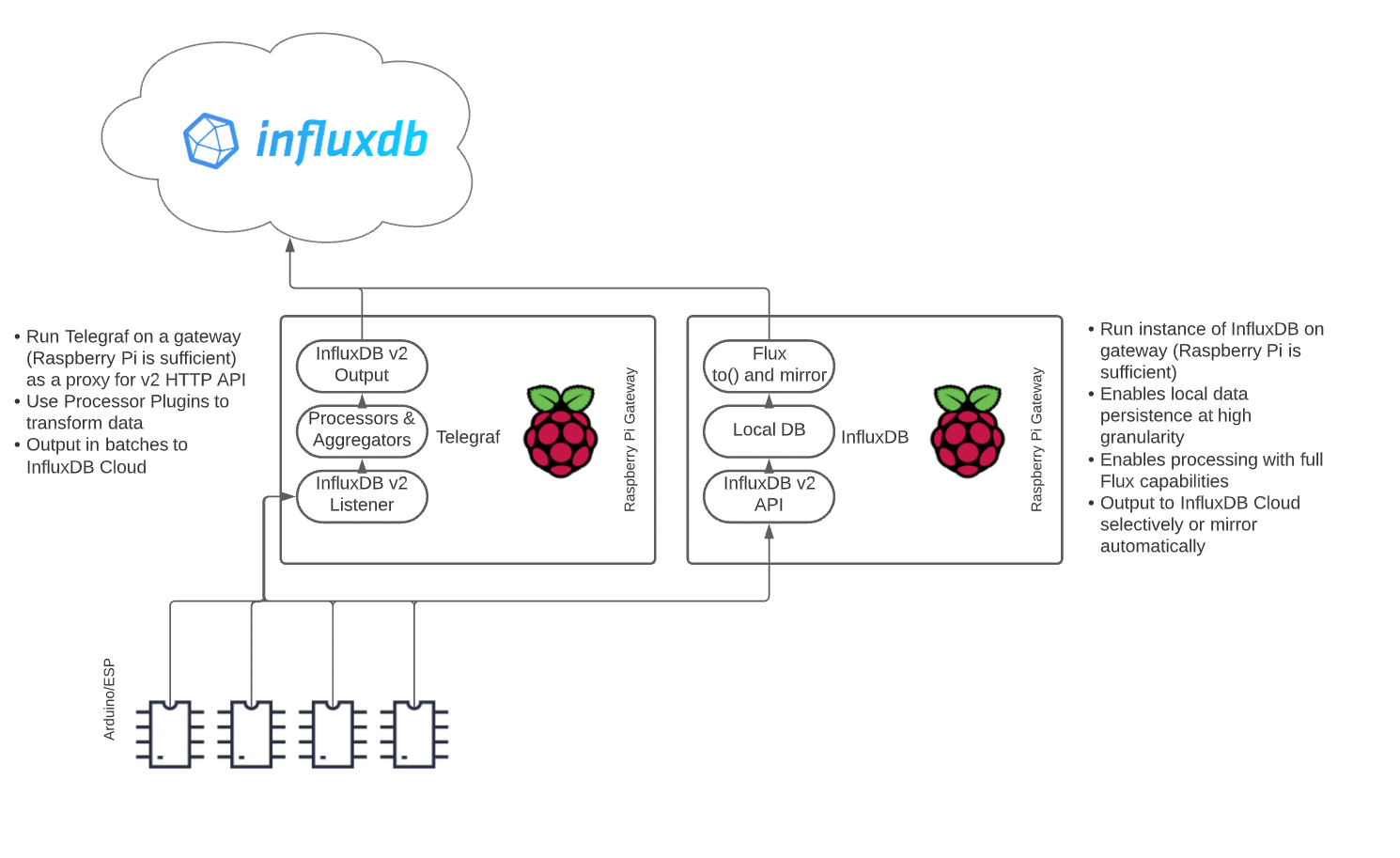 Both of these models allow you to send data to the InfluxDB endpoints using REST or the Arduino SDK. Or, if you use serial connection over USB or pins, you can run a Python script on the Raspberry Pi to regularly collect data from the Arduinos, format it in line protocol and push it to the Influx endpoints on localhost. Our team has written a great blog post that uses this architecture. You can read more about it here.

Extra Credit: Adding a MQTT broker to your gateway:

As mentioned above, adding a broker to your gateway provides a potentially critical layer to stage data in a manner that allows multiple consumers and producers to communicate in a pub/sub manner. MQTT brokers use topics, sometimes called channels, that act as endpoints for specific pieces of information created and transmitted by clients.

Topics are hierarchical, so you can define schema within them to make machine-to-machine communications simple and self-documenting. For example, here are a list of topics you may use in a home lab:

As you can tell, accessing information is as easy as understanding the topic structure. Clients can publish to their own topic tree or subscribe to a peer’s tree to exchange information as it is published. InfluxDB has developed a telegraf plugin to easily subscribe to and parse MQTT topics, so adding a MQTT broker to the left-side architecture above will add significant benefits in reliability, security and long-term supportability. In this situation, your Arduinos are ignorant of the upstream InfluxDB. There are many how-tos on publishing to MQTT topics from an Arduino. 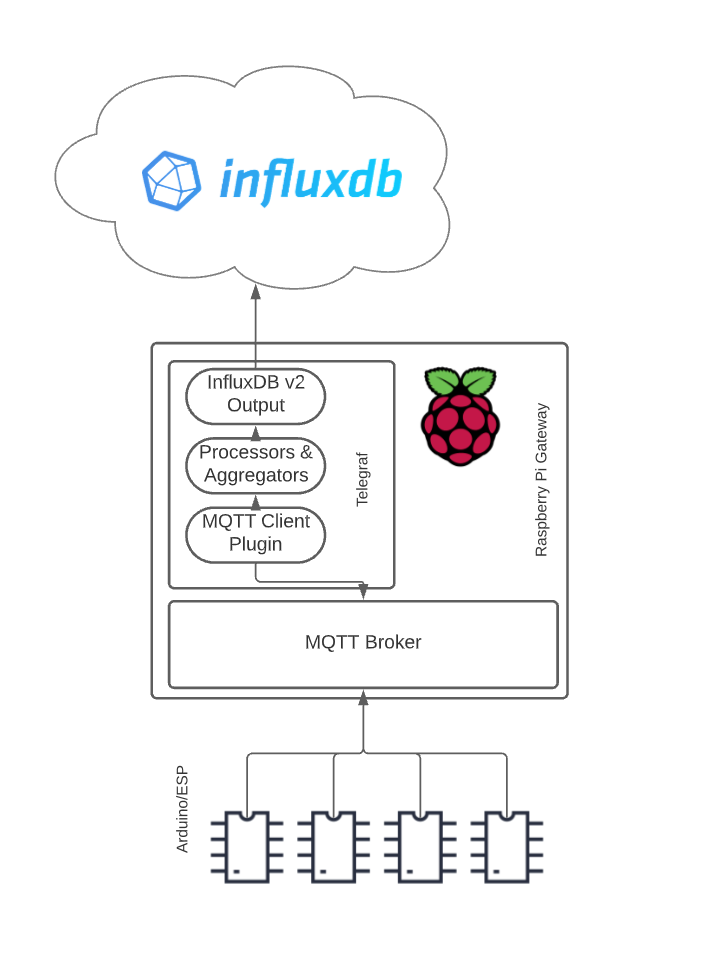 You can add a local InfluxDB to this architecture as well, although it would currently require loading both Telegraf and InfluxDB on the gateway, likely not an issue at all.

To summarize, there are several possible architectures for delivering data from sensors attached to an Arduino to InfluxDB. Using best practices and a robust IoT architecture, we can always be sure that our pilot or prototype is always ready to scale to production.