Walmart is the largest company in the world and the single largest employer, with 2.3 million workers serving 200 million customers every week.

So it’s a big deal when they roll a blockchain initiative into production, especially one designed to offer a new solution to what may be the ultimate challenge: sharing data between different companies.

“Let me be crystal clear, because I can promise you that Walmart is not chasing the new shiny coin,” emphasizes Walmart’s vice president of food safety and health, Frank Yiannis. “I know blockchain is in vogue and in fashion, but what we’re trying to do is solve business challenges.”

Before blockchain, it took Walmart six days to track where its produce came from. Now it takes two seconds. Last month Yiannis described their approach at a “Business of Blockchain” conference sponsored by MIT Technology Review, explaining that “We’re now beyond proof-of-concept…

“Serving safe food in 12,000 stores around the world, with tens of thousands of suppliers, is a pretty daunting challenge, and it’s a very important responsibility. So we’re always looking for better ways to do that.”

The Ultimate Use Case

In the 1980s a typical grocery store had just 15,000 food items — but today it’s over 50,000. In an IBM video, Frank Yiannas notes there’s an “unspoken expectation” that food will, of course, be safe, and that when there’s a food recall, “that food product is guilty until proven innocent.” Walmart will pull all the carrots until they’ve identified which ones are affected by the recall, only then returning the ones which aren’t affected. Today’s food system involves many players, each with its own way of tracking where the food has been.

“Most actually do it on paper, or on systems that don’t speak to each other,” Yiannis said.

Regulators only require “one step up, one step back” traceability, so even when records are digitized it’s being done with different systems. Blockchain offers a ready-made system for collecting data not only from different companies but from different resources. “If we’re linking that data with other data points, the internet of things — all that information will yield to insights that will allow us to have a safer, more affordable and sustainable food system.”

Walmart began testing in 2016 with the IBM Blockchain Platform. Qwartz paid a visit to their global food safety collaboration center in Beijing, where Walmart first launched its blockchain pilot program. (“Instead of a lab filled with scientists testing meat or vegetables for toxins, it’s really just a series of meeting rooms, much like any co-working space across the Chinese capital.”) Walmart had suffered some bad press in China in 2011 — and again in 2014 — each time apparently due to an issue with their suppliers. Walmart’s process now collects and digitizes data about pork — farm inspection reports, livestock quarantine certificates — and adds it to the blockchain.

A second pilot program involved mangos, which take a very long journey from farm to table. First, they’re shipped to a packing house, delivered to the U.S., then processed again and packaged for shipping and distribution by truck to thousands of Walmart (and Sam’s Club) stores. Yiannis remembers bringing a package of mangos to a team meeting and challenging his staff to tell him where it came from. “It took us six days, 18 hours and 26 minutes… Almost seven days… Ad we do better than most.” But after implementing a blockchain-based system, a trace back to source took just 2.2 seconds. “That’s food traceability at the speed of thought. As fast as you could think it, we could know it.”

“This isn’t a lab. This isn’t theory,” he told Qwartz. “This is the real world.” 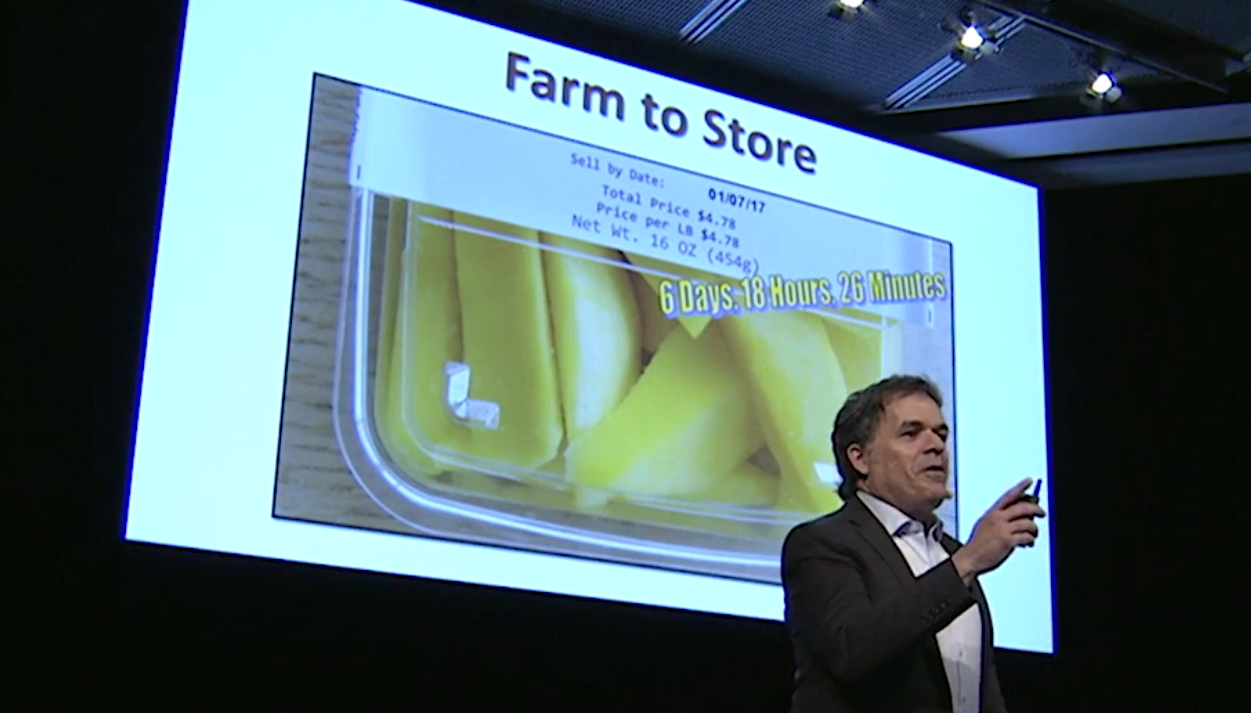 The blockchain-stored data also contained a wealth of other information about mangos, Yiannis told his audience at MIT. “Did they receive the hot-water treatment? Were the farms inspected? If they made an organic claim, we could know if it was truly organic.”

But Yiannis also reminded his audience that foodborne illnesses are currently estimated to cost between $55 billion and $93 billion just in the U.S., pointing to the CDC’s ongoing response to E. coli infections in romaine lettuce, with over 121 cases reported in 25 different states, including 52 hospitalizations and one death in California. While today’s food system is safer than it’s ever been, “one food-borne illness is one food-borne illness too many.”

Yiannis also remembers a health scare in 2006 when health officials pulled all spinach for two weeks to trace a contamination. “When it was all said and done, it was one producer, one day’s production, one lot number… Spinach suppliers will tell you it took them six or seven years to regain sales and customer trust.” 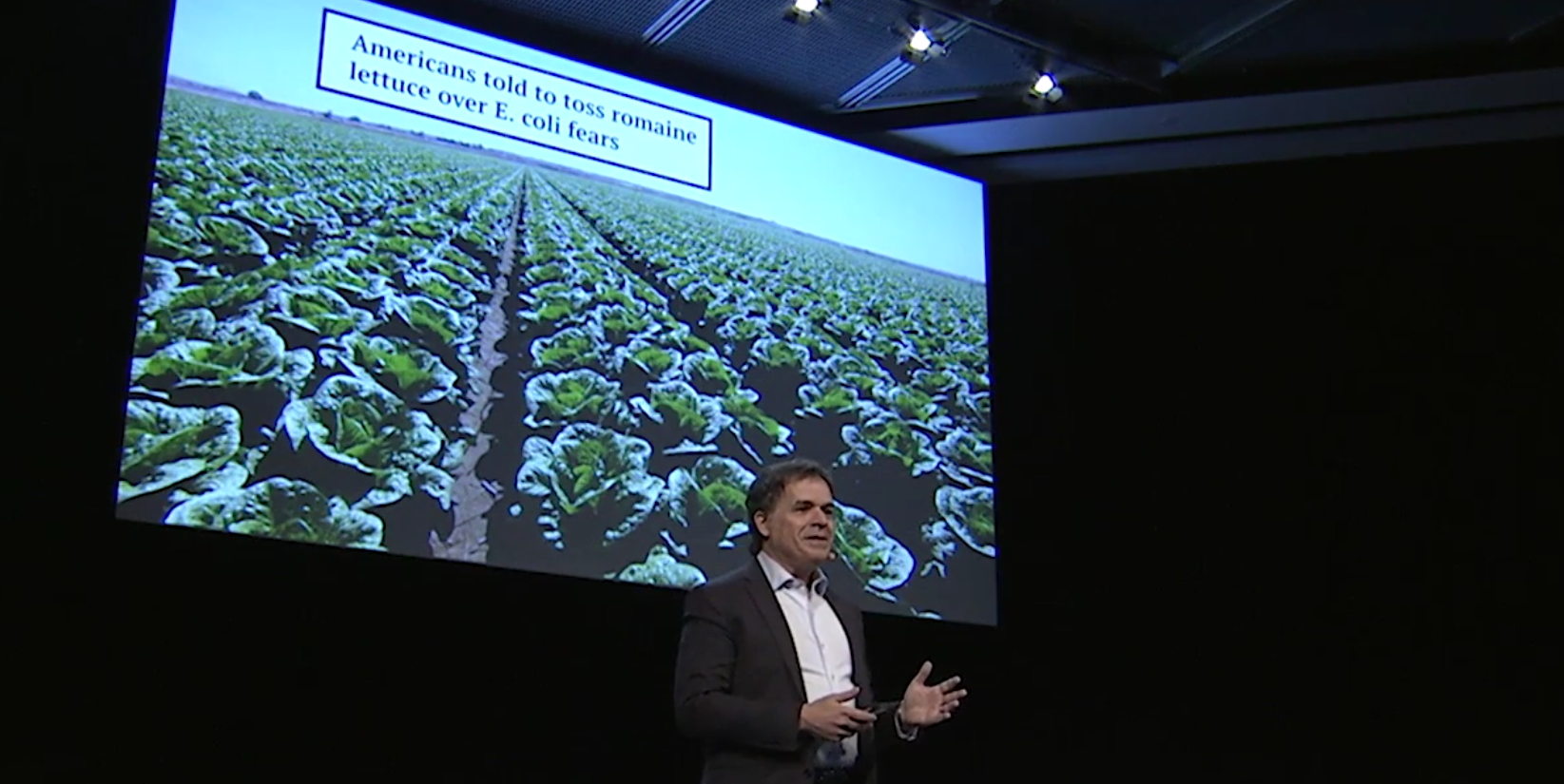 “Everybody gets hurt in a recall,” agrees Brigid McDermott, a former software developer who’s now vice president of business development for blockchain at IBM. On Walmart’s podcast — “Outside the Box” — she shares her conviction that “will transform transactions the way the internet has changed communications… It’s the thing that gets me up every morning because I think it’s true.”

McDermott says it’s like using a pen when doing a crossword puzzle instead of a pencil — so there’s no going back later and changing what was written. “You say, ‘Hey there is a lot of information that I need to share across the ecosystem. And I want to make sure that people know that I didn’t erase that information.’” This solves a trust issue, which makes the whole food ecosystem more comfortable with sharing data. “All of a sudden, the 80 percent of the world’s data that is sitting in silos in companies around the world is now accessible.”

“And now we really get to big data,” McDermott said. “This is what big data’s promise is. The missing link which blockchain has solved is how do we get people to share the information so that we can use the information and get the insight out of the information.

“The benefit to the consumer is better health. Not necessarily for every consumer but if you’re the one who has the bad salsa, you want to know”

Of course, blockchain solves other issues too. At MIT Yiannis drew a slow laugh from his audience with this example of the importance of traceability. “Did you know that there’s more organic food sold in the world than there is produced in the world?”

“That’s a miracle,” he joked, after putting up a slide says that each year food fraud costs the industry between $10 billion and $15 billion. “We envision a world where blockchain, through this shared concept of trust, will allow you to track and really know — “When I buy an organic product, is it truly organic, or is somebody just charging me a premium?”

There are other advantages too. “Every day you take out of distribution is a day you give back to the customer, and potentially reduce food waste.”

Yiannis describes himself as a blockchain skeptic who had an almost religious conversion. “I’ve been working on trying to digitize and create a digital transparent food system with better traceability for 30 years. Never been able to do that.” But the complex stops along the food-supply chain offer another example of a system that’s both decentralized and distributed. “If you think about it, it’s almost as though blockchain was made for the food system.”

He suggests that Walmart’s experience proves the old saying that blockchain is a team sport. “Our CEO got so excited, he reached out and started talking to other suppliers, and now we have 10 large brands working together.” Companies like Dole, Nestle and Tyson Foods all got involved and “we’ve tracked millions of food packages, and we’ve tracked over 100,000 traceability events.”

Walmart’s involvement assured other participants that the blockchain idea had some “legitimacy,” according to Howard Popoola, Kroger’s VP of corporate food technology and regulatory compliance. Kroger ultimately became one of the 10 major brands participating, according to Fortune, and Popoola says he’d concluded that “the food industry is ripe for a solution like that.”

In another article, Fortune notes that Yiannis has demonstrated the technique at Walmart’s annual shareholder’s meeting.

This could be only the beginning. Walmart already has several blockchain-related patents, and has recently filed for two more, according to finance site Investopedia. One patent covers a system that automates both package tracking and encrypted payments to vendors for same-day deliveries — using as its example fresh produce. And the second patent covers a related courier shopping system. It’s a sign that they may be planning an ambitious response to their battle with Amazon since an earlier patent also describes a drone-ready smart package with data about its contents and delivery history. The same article notes that blockchain applications are also being explored by Target.

Yiannis told Qwartz he envisions a day when packing pallets will even transmit the temperature of food cargos as they’re being shipped, with that data also stored on the blockchain for both regulators and consumers.

And back on YouTube, one commenter joked that food buzzwords could soon be transformed, with “farm to table” becoming “cloud to client.”