Update What Spotify Learned From the Flop of its App Store

Platforms may always win, so the saying goes, but this does not mean all platforms will win. Music service Spotify launched a music-focused app store in 2011 that failed to capture the public interest, but did at least teach the company some important lessons in developing applications at scale, some of which were shared by Spotify director of engineering Marcus Frödin, during the recent the Spark the Change conference in London.

Spotify had a very public experiment which began in 2011 and was deemed as a flop by 2014. The Spotify team decided that they were going to become “the” platform for music by not trying to create an app but rather an entire app store. Frödin said they believed that platforms always win, deciding to offer a public application programming interface (API) that would allow them to become an operating system just for music that artists and users could build on.

By 2012, the company did have hundreds of apps shipped and they hired a specialized team. By 2013, they still only had those hundreds of apps, with no growth, and users weren’t spending a lot of time with those apps. Within three years after commencing, they decided to shut it down completely at a great monetary and morale cost to the company.

Why did it fail? They were following Stephen Bungay’s Art of Action for strategic deployment, thinking in three distinct phases:

Picture this as a slow, but continuous cycle where the Outcome then comes back and informs the next Planning which then leads to the next Action. But in each of these steps in the three-year commitment to a Spotify music app platform, Frödin has uncovered a significant gap that didn’t allow for learning from mistakes or pivoting when things went wrong:

Where did these gaps come from? This typical top-down oriented system leaves some serious holes and leads to asynchronous learning, Frödin said.

Spotify Learns to Organize for Speed

In order to get ideas moving rapidly through an organization, Spotify believes that iteration with purpose is key.

“You can get a lot of speed by doing a lot of stuff at once,” Frödin said, which is why they have worked to create a rather unique but fractal organizational structure. 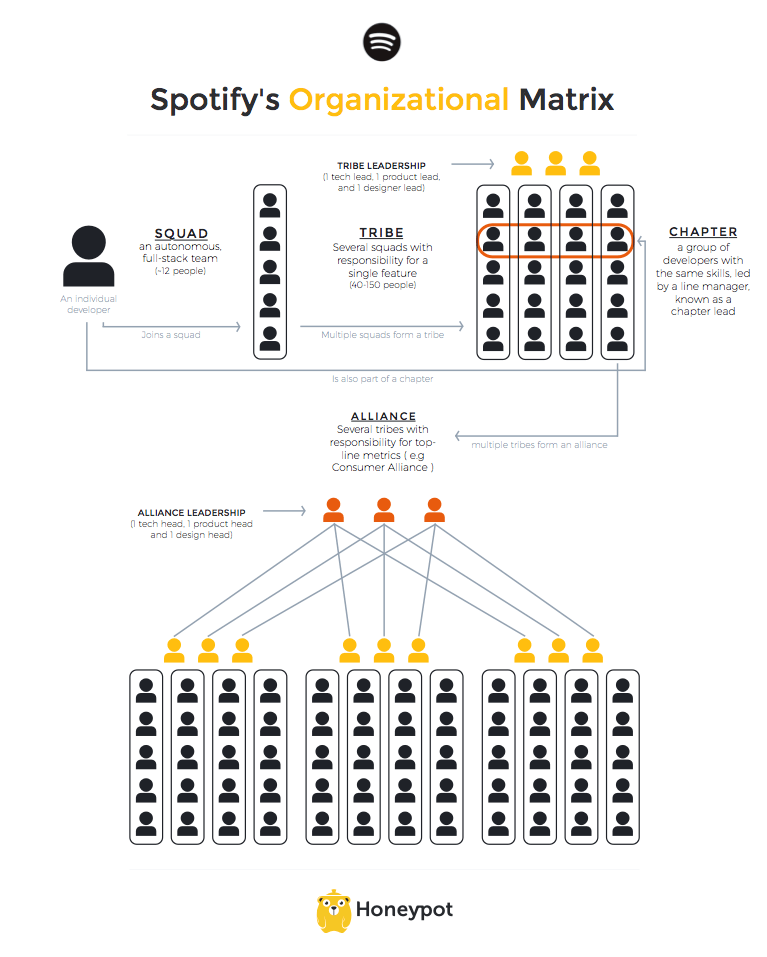 To put it into perspective, LinkedIn has about 2,500 people currently working at Spotify. A lot has been written about Spotify’s organization already, so here’s a brief summary:

Now, Spotify had these Squads and this unique organization before, but all of these Squads were shipping to the user focus team. In 2014, they switched that all Squads were directly interacting with users.

With each of the aforementioned steps, Spotify’s Squads and other organizational structure focuses on these questions, in order to link strategy and experiments (and also failures) to a measurable company-wide strategy:

They have answered these questions by creating company rituals of strategic intent, focused on “closing that gap is propagating that intent,” with constant feedback and measuring.

Spotify, like most companies, likes motivational acronyms that keep people focused on shared objectives. These two rituals work together to help regularly review objectives and pivot priorities so they don’t necessarily have fewer failures but that they fail faster.

Frödin calls this ritual “How we argue about strategy to understand how we believe.”

To learn more about Spotify’s DIBBs, read this blog post by Henrik Kniberg.

TAPS: Now, Next and Later

For Action, how do you go from weeks of planning to something that is actually being tested by a team or many teams? With TAPS, Spotify works with a sort of reverse Kanban, with the Bets organized in this order from left to right: Now, Next, and then things that can be dealt with Later. The Now list is then organized from highest priority to lowest and is then shared with the entire company. TAPS is reprioritized every six weeks, in a special meeting to check in on the Bets.

“TAPS create peer accountability, natural pressure to ship and transparency by default.” Frödin explained this is because in everything Spotify does making sure that they put those who are going to work with it and use it are closer to the process.

“We believe communication is a little bit of an anti-pattern. The cost of communicating goes up as the distance increases. The good work assignment is to get the need for communication to go down.”

This is why, while many companies with software at the core are allowing for distributed or remote teams, Spotify makes sure that its Squads are collocated. Frödin said this is because when they share a codependent mission, it’s important for them that everything that’s necessary to get work done is right there with them, including all teammates.

To add to that, in their focus on faster is always better, they also hold true to another value: “Over-reacting beats under-reacting,” which simply echoes the importance of both speed and communication.

Where Does Spotify Find Itself Now?

Or better yet, what happened after the app platform stumble? And did their change to “speeding through failure” actually work? Frödin told us they built a Web API, which enabled them to “build a lot of interesting stuff for our users and internally,” as the API enables them to have a lot of flexibility for rapid change.

And then PlayStation Music came about, which only took four months to go from idea to Minimal Viable Product in the hands of gaming users.

“The Strategic Intent was Ubiquity — to have people use Spotify everywhere and the [music app] platform was just a tactic to get there,” he said. Now the app platform has faded away but the API enables Spotify’s ubiquity, including through the important partnership with PlayStation.

Finally, Spotify has learned that it’s much more important to hire adaptable people with the ability to learn than the specialized teammates they had targeted before.

Now we will see how this fast-learning culture will continue when they likely go public later this year.