Comparison of R vs Python For Data Science 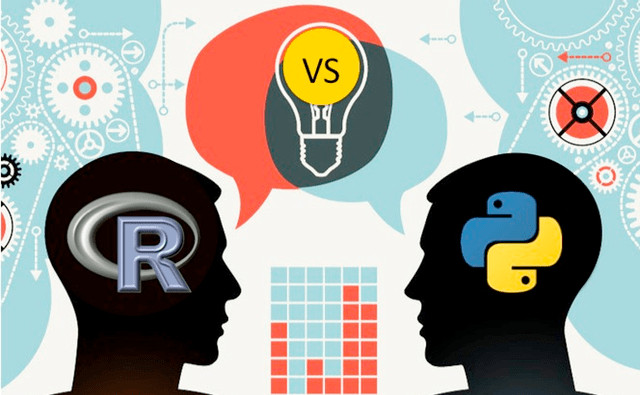 If you are someone who is a beginner in the field of Data Science and Machine Learning and want to learn it, you must be confused between R and Python as both the languages are widely used for data science.

R and Python are two open-source programming languages with great community support. New libraries or tools are added continuously to their respective spaces. R is mainly used for statistical analysis while Python provides a wider approach to data science.

R is a popular statistical modeling language that is used by statistics and data scientists. It provides support for various statistical packages that are most widely used for data analysis and data modeling. Rose Ihaka and Robert Gentleman together developed R in 1995 at the University of Auckland.

There are more than 10,000 packages in the library distribution CRAN repository of R. These packages are tailored for a variety of statistical applications. While R may be a hardcore statistical language, it provides extensible support for various fields, ranging from healthcare to astronomy and genomics.

Python is a popular programming language used for developing web applications as well as data science operations. Python provides a large number of libraries that appeal to programmers and data scientists alike.

What makes python so popular is its ease of learning. This makes Python a highly popular language among newbies who want to gain in-depth insight into computer programming. Python is highly readable, easy to understand and compresses complex code in single functionalities.

R vs Python for Data Science

R and Python are states of the art in terms of programming language oriented towards data science. Learning both of them is obviously a perfect solution.

With the massive growth in the importance of Big data and Data Science in the software industry, two languages have emerged as the most favorable languages for developers that are R and Python. These two languages have become the first choice of data scientists and data analysts. Both of these are similar yet different in their own ways which makes it difficult for the developer to choose one amongst them.

While R is most widely used for statistical modeling and data analysis, Python is used for data analysis as well as web application development.

Although it is suggested to use the language you are most comfortable with and one that suits the needs of your organization, for the purpose of this article, we will evaluate two languages. Here we will compare R and Python in four key categories: Data visualization, Modeling Libraries, Learning Curves, and Community Support.

Any language or software package for data science should have good data visualization tools. Good data visualization involves clarity. No matter how complicated your model is, there will be a simple and unambiguous way of illustrating your results such that even a layperson would understand.

Data science requires the use of many algorithms. These sophisticated mathematical methods require robust computation. It is rarely or maybe never the case that you as a data scientist need to code the whole algorithm on your own. Sometimes it’s very hard to do so, data scientists need languages with built-in modeling support. One of the biggest reasons why R and Python get so much traction in the data science is because of the models you can easily build with them.

Many people are looking to get into the data science bandwagon, many of them have little or no programming experience. Learning a new language can be challenging, especially if it is your first. For this reason, it is appropriate to include ease of learning as a metric when comparing the two languages.

As a data scientist, you are required to solve problems that you haven’t encountered before. Sometimes you may have difficulty finding the relevant library or package that could help you solve your problem. To find a solution, it is not uncommon for people to search in the language’s official documentation or online community forums. Having good community support can help programmers to work more efficiently.

Both of these languages have active Stackoverflow members and also an active mailing list available. R has an online R-documentation where you can find information about certain functions and functions inputs. Most Python libraries like pandas and scikit-learn have their own official online documentation that explains each library.

R vs Python for machine learning

R and Python are the two most commonly used programming languages for Machine Learning and because of the popularity of both the languages fresher are getting confused, whether they should choose R or Python language to commence their career in the Machine learning domain. Here we are discussing R vs Python for machine learning in some factors. It will help you to understand these two languages better.

that
Here is a five-year graph from 14 Aug 2014 to 14 Jan 2018. It is clearly shown in graph R is more popular than Python according to trends in Google for the last five years.

So this is the five-year graph for job trends in R and Python according to Google. This graph shows that in 2014, the ratio of R jobs was quite high compared to 2018. That means the demand for R developers is decreasing with time. Compare to 2014 jobs in Python, demand for Python developers is increasing.

Average Python Developer Salary in the United States is $117,472 per year.