HOW IS C++ STILL USED FOR THE AUTOMOTIVE INDUSTRY

Continue reading to find out what C++ is, why it is still relevant in 2022, why the automotive industry develops software in C++, and how much C++ programmers make. 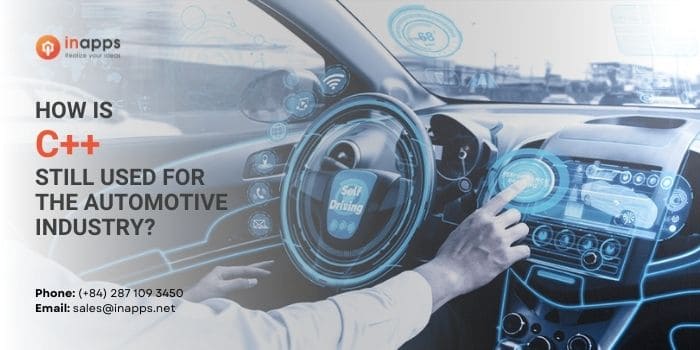 C++ is, in fact, one of the most widely used programming languages. It is a cross-platform language for developing high-performance applications. (Definition on Wikipedia)

C++ is most commonly used for developing large software infrastructure and applications that run on limited resources. Because C++ allows programmers to directly manipulate the hardware (or machine) that it runs on. They can fine-tune their code to run efficiently in any environment, even when limited hardware space or energy is available to power the application.

This translates to applications that run quickly and reliably on various devices, making C++ ideal for forming the foundation layer of many critical applications.

Why is C++ still used for the automotive industry?

Developers used C (the predecessor of C++) in the early 1980s to create electronically controlled ignition and fuel injection systems, and today electronics account for 35% of the cost of a car.

C++ had evolved so quickly in the last decade that programmers could create next-level functions and defense features long before ISO 26262 compliance was required.

Especially, C++’s role in automotive is still significant today. Here are some of the reasons:

1. The primary libraries and frameworks for computer vision and image recognition are written in C++.

The eyes of self-driving cars are computer vision and image recognition. And, as it happens, C++ is excellent for orchestrating multiple sensors and indicators.

OpenCV is a large C++ computer vision library. You can use OpenCV to transform, resize, and colorize images; perform contour finding, gaussian blurring, and edge detection; and read images in a pixel matrix. And Tensorflow, a C++ framework, is still the most popular deep learning framework.

Without these technologies, Tesla cars would be blind. However, the speed with which C++ processes data is what truly makes the magic work. 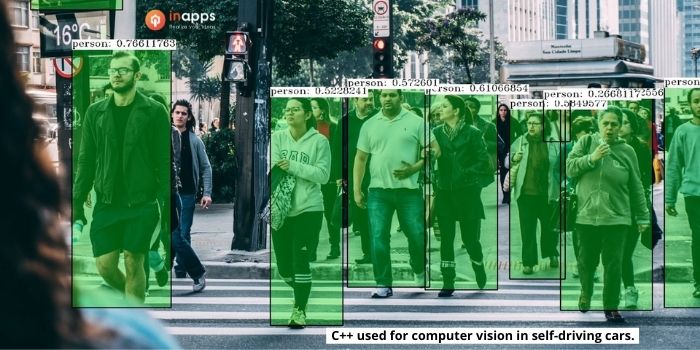 2. C++ is the primary programming language of embedded systems.

Because the code can run high-level structured programming on low-level mechanisms, engine control units (ECUs) in embedded systems are best controlled and programmed in C++.

Smart cars have at least 100 ECUs that perform various functions ranging from the most basic (engine ignition and power steering control) to comfort, access, and security.

As a result, many ECUs control the transmission, infotainment, engine management, passive and active safety systems (ABS and ADAS), navigation, security, and climate.

The expensive hardware and software built into the car create a safe and comfortable environment for the passengers and account for approximately 35% of the vehicle’s price. 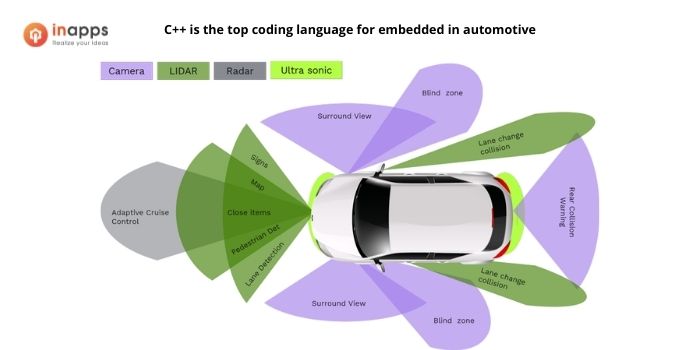 3. C++ satisfies the functional safety requirements of the automotive industry and the ISO 26262 standard.

According to the most recent ISO 26262 requirements, automotive manufacturers must:

The language supports many libraries and is compatible with cross-platform compilers that cover the majority of CPU classes. It meets all of the ISO 26262 requirements, making it the best choice for automotive development.

How is C++ still used for automotive? 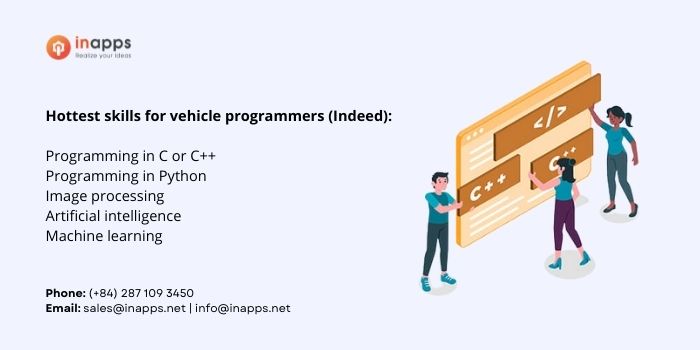 C++ is a popular programming language among autonomous vehicle developers.

C++ is a fast, powerful programming language ideal for embedded development. Leaders in the automotive industry, such as Tesla, Apple, Ford, and General Motors, have resulted in a surge of C++ programmers.

According to a study conducted by Indeed, Aptiv and Nvidia are the top C++ vehicle programmer employers in Detroit and Silicon Valley.

Automobile companies are most interested in programmers who can code in C++ or C.

Following that, Python programmers and developers with experience in image processing, artificial intelligence, and machine learning will be considered.

Once-simple ECUs are now intertwined into complex and well-balanced systems that decide when to stop, start, and cool a car, among many other micro-decisions that were previously the driver’s responsibility.

Yes, it is. Here are the reasons:

C++ has been around for over 40 years, so it is, indeed, old. But it also means it’s been around for 40+ years, which means hundreds of thousands of hours have been spent by developers building out libraries for its use, perfecting its methodology, developing test cases, and refining it into the best version of itself.

From a developer’s standpoint, and in terms of computer science work, it also means that there are millions of programs already written in C++. So even if nothing new were ever written in C++, there would still be a lot of work required to keep what exists going strong!

As a result, C++ is significant regardless of how old it appears. 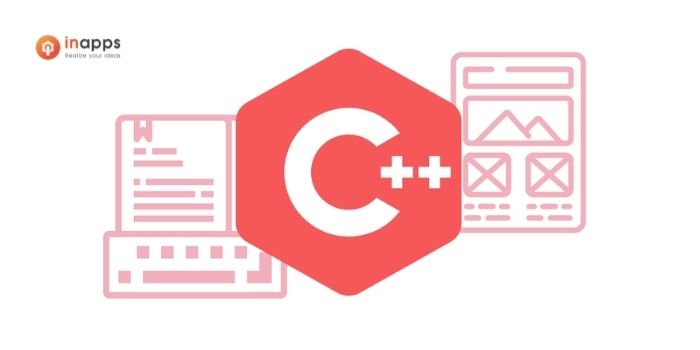 C++ is a “low-level” programming language, which means it provides little (or no) abstraction from the computer’s architecture (1s and 0s) and maintains a similar structure to the processor’s system. In that sense, it keeps the “low-level” function’s simplicity and directness.

As a result, its performance and memory are efficient, as there isn’t much in the way of intermediary between what you’re writing and what it takes for the computer to understand that code.

This means that C++ performs well and efficiently. That’s one of the reasons it’s still in use and why that use is expanding.

Unlike other programming languages, C++ is adaptable and has evolved quickly to meet the needs of developers and software.

Furthermore, because C++ has been widely used for so long, it is highly compatible with most other languages on the market and for most emerging uses. C++ can be used for client-side infrastructure and inter-processor and network communication. And there’s more.

#4. It’s the backbone of OS, Browser, Libraries, and more

Whatever you’re creating, if it’s user-facing, you’ll almost certainly be creating it for use with an operating system. That means it’ll have to work with C++.

Why? Because C++ is used to build almost all of the world’s major operating systems, including Microsoft Windows, Mac OS, and Linux. Regardless of the many applications of C++, this application necessitates its understanding.

This is true for all of the world’s major web browsers. Their rendering engines are written in C++ because it is fast and straightforward, and we want our browser to render as quickly as possible (we’re impatient, let’s face it). 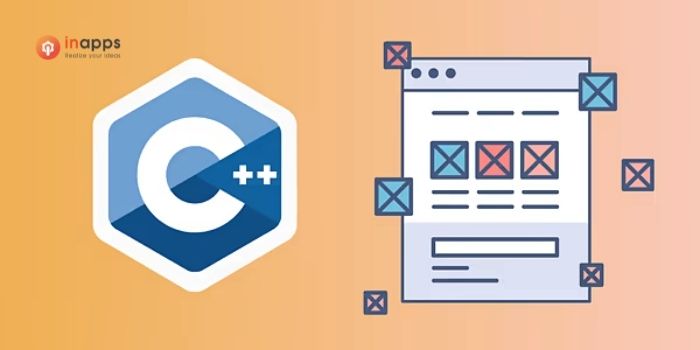 Another significant benefit of C++’s age and maturity is its large community of users. And this community of users, which is spread around the world, supports C++ (and those who write in it) with a plethora of paid and open source support. C++ has many online courses, code libraries, resource banks, and open source communities, making it the sixth most used and followed tag on StackOverflow and GitHub.

That means it’s simpler to use and more straightforward to learn.

How much do C++ Developers make?

Here is the salary of C++ Developers in some countries:

Where to hire C++ developers?

One major factor that stifles the automotive industry’s progress is a talent shortage. C++ developers are in high demand, and as we can see from the salary discussion above, they earn a wide range of pay for essentially the same set of skills.

The cost of hiring a developer in Vietnam, compared to hiring one in the US/UK/Europe, is considerably cheaper (reduce up to 70% of IT cost or only from $20,000 to $40,000/project). Compared to India, China, or the Philippines, Vietnamese developers’ rates are equal or even cheaper while their skills (both technical skills and soft skills) are equivalent.

Hiring a perfect C++ programmer for automotive projects is a difficult task, and InApps has extensive experience in selecting the best candidates for clients all over the world.

So, if you need a C++ programmer, all you have to do is share your expectations and requirements with us, and our dedicated recruiters and sales representatives will contact you.

DROP US A LINE and get access to the best talents.