Kubernetes is the core substrate around which the cloud native ecosystem operates. The convergence properties of Kubernetes lend to the purest implementation of GitOps. While the initial adoption of GitOps tooling centered around “Kubernetes deployments as code” that are synched with target clusters, it has evolved to manage drifts in core platform infrastructure with the emergence of projects such as Cluster API and Crossplane.

GitOps as a Core Principle of CNCE 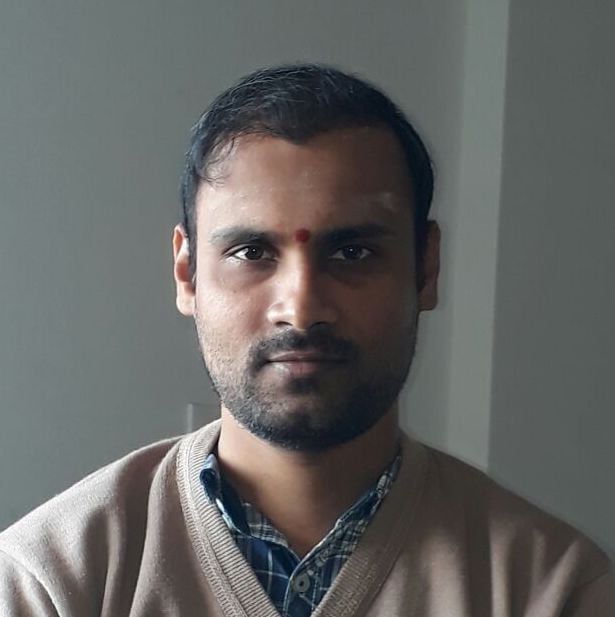 Karthik is a co-founder and the CTO of ChaosNative.

When the LitmusChaos authors defined cloud native chaos, the idea was definitely to keep the chaos/resilience testing methodology and experience homogeneous with other Kubernetes functions via the usage of custom resources (CRDs) to define fault injection and steady-state validation intent. This type of definition lends itself to storage in a git source, and hence audit, versioning and automation.

Automation is a core principle in chaos engineering. While this holds true for any engineering system, its relevance in the cloud native environment is more. This is driven by a relatively faster upgrade cadence of core application services, dependent tooling from the CNCF (Cloud Native Computing Foundation) ecosystem, Kubernetes versions and sometimes the underlying hosting infrastructure itself. By executing chaos tests, changes can be verified. This calls for chaos experiments to be tied with standard GitOps flows.

As the above discussion reveals, the following are requirements of effective chaos engineering with GitOps:

While the immediacy of the need is clear, there are some practical challenges:

Litmus addresses these requirements through a custom GitOps implementation that ensures the control plane residing on the cluster picks the latest chaos definitions in the git source, maps applications to specific scenarios or workflows and launches these upon changes to the apps on the cluster.

The Litmus control plane, which runs as a set of Kubernetes microservices, carries out interactions with git in a couple of different ways.

Litmus provides readily usable fault templates while also allowing users to construct more complex workflows using these faults, called predefined workflows in litmus lingua franca. These can be stored in a specific structure in a git repository that serves as the canonical source of a “ChaosHub.”

Each chaos experiment or predefined workflow is characterized by a set of files: the core custom resource, (optional) RBAC definitions to carry out the experiment and some metadata files (containing descriptions, keywords, source links, parent category, etc.). Such a ChaosHub, public or private, connected via SSH keys or access tokens, can be added into the Chaos-Center and leveraged as a catalog to choose experiments executed on the cluster. Changes made at source, via user commits, to the fault or workflow templates are made available to developers for subsequent invocation of the experiments. 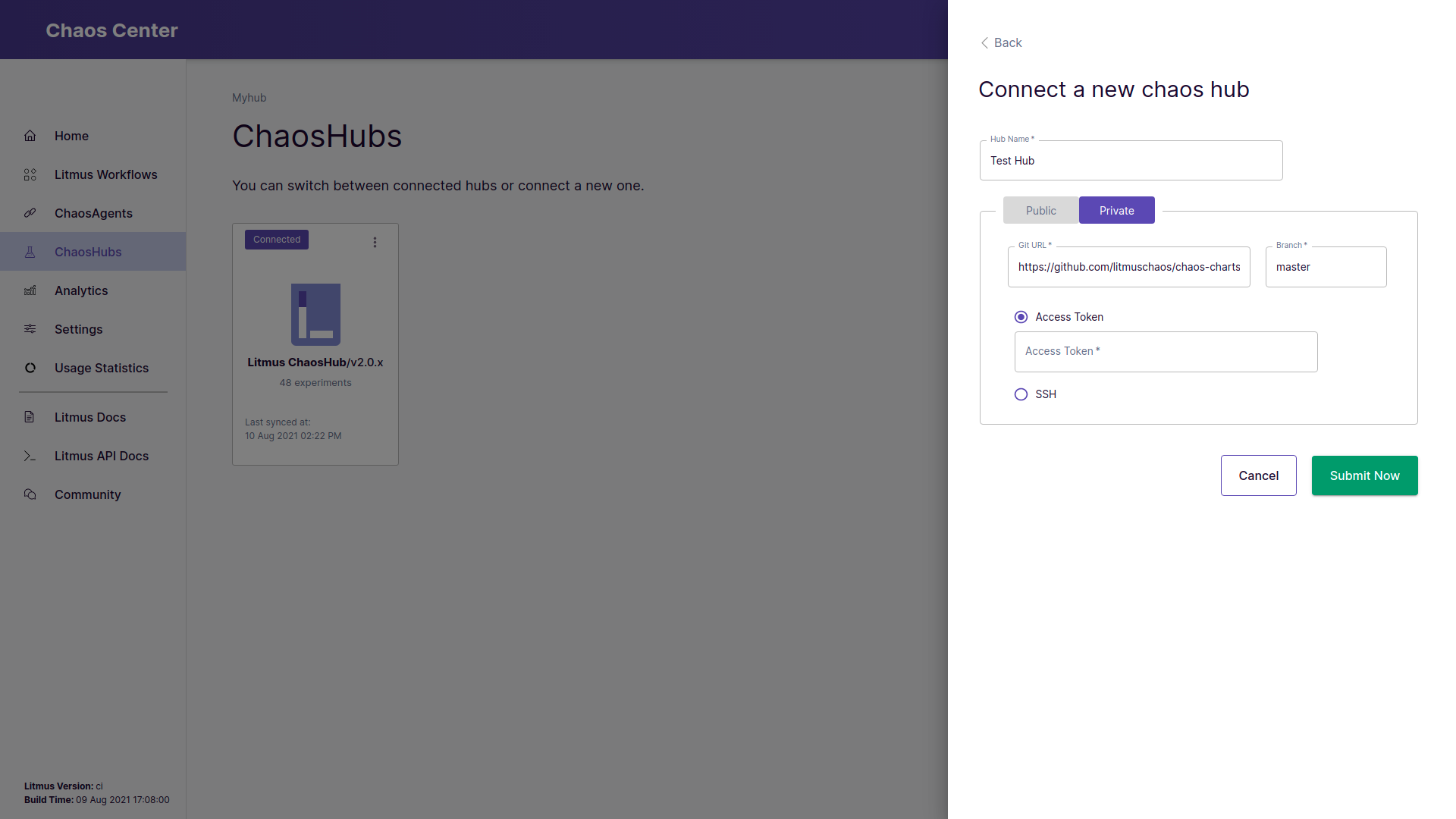 While the previous section describes hand-written chaos artifacts, there are mechanisms to ensure chaos workflows constructed using the chaos dashboard on the cluster are saved into source, facilitating a golden copy. The Litmus server runs a git service by which newly constructed workflows are stored into a git repository, which can be the same as the one serving as the hub source or a different one, along with instance metadata of the workflow, its associated control plane and the target cluster environment. This git service is bidirectional in nature; for instance, changes made into these workflow specs on the git repository are automatically synchronized into Chaos-Center. The updated specs can be leveraged for subsequent invocations of this workflow. 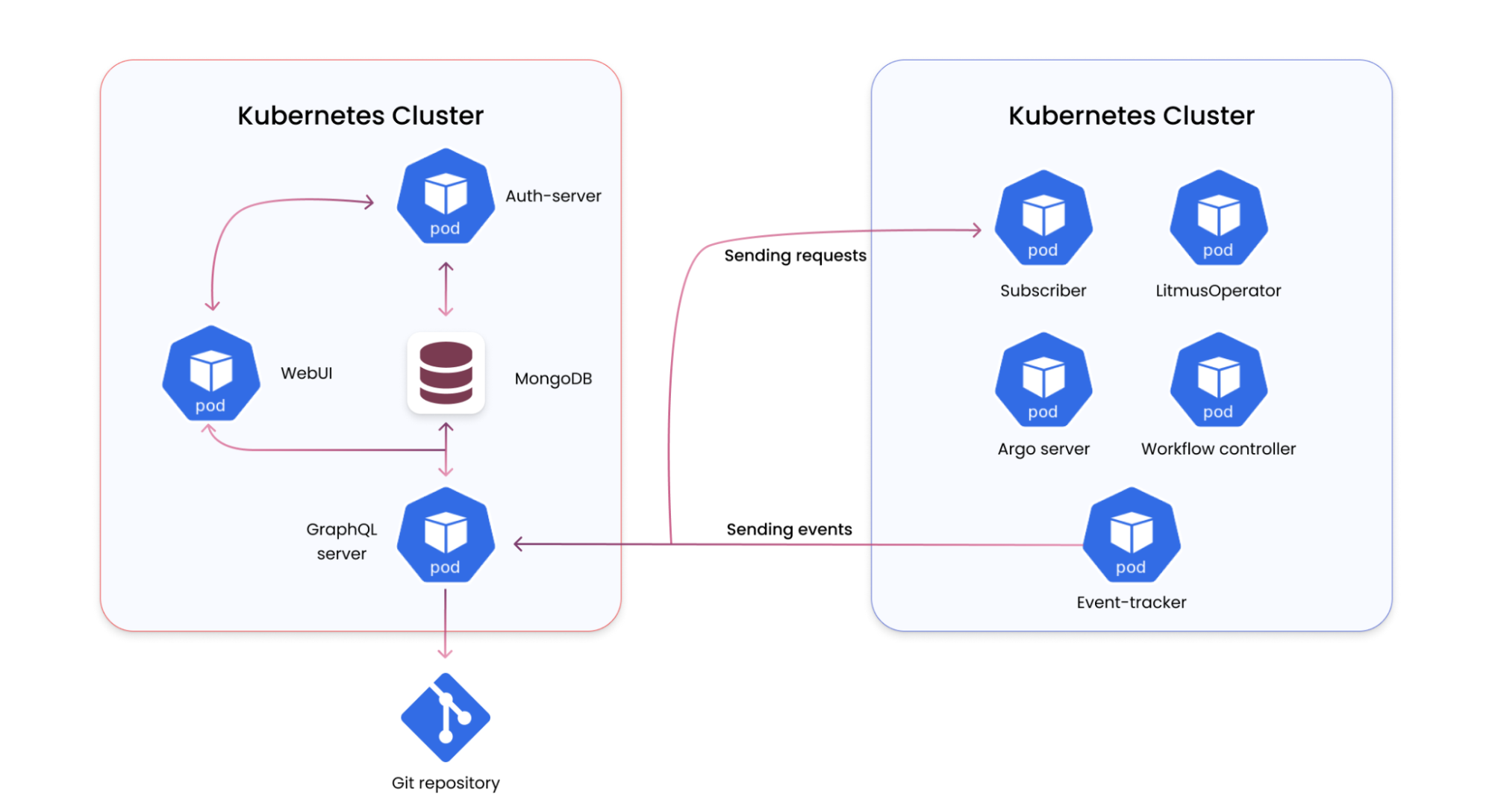 With the chaos-artifact changes being made available, the next requirement is to map these workflows with applications on the cluster. This is accomplished by the event-tracker operator in Litmus, which enables a subscription model wherein a given Kubernetes workload can subscribe to a git-synced chaos workflow on Chaos-Center and also describe the event that triggers this workflow, declaratively via an EventTracker policy resource.

The event tracker watches for the said change on the application workload, which lends itself to monitoring via annotations, and triggers the workflow once the change is made, having mostly occurred through sync-actions of standard GitOps controllers. This way, the sanity chaos tests can be performed, with rollback mechanisms set up by users based on the ChaosResults reported by the experiments. 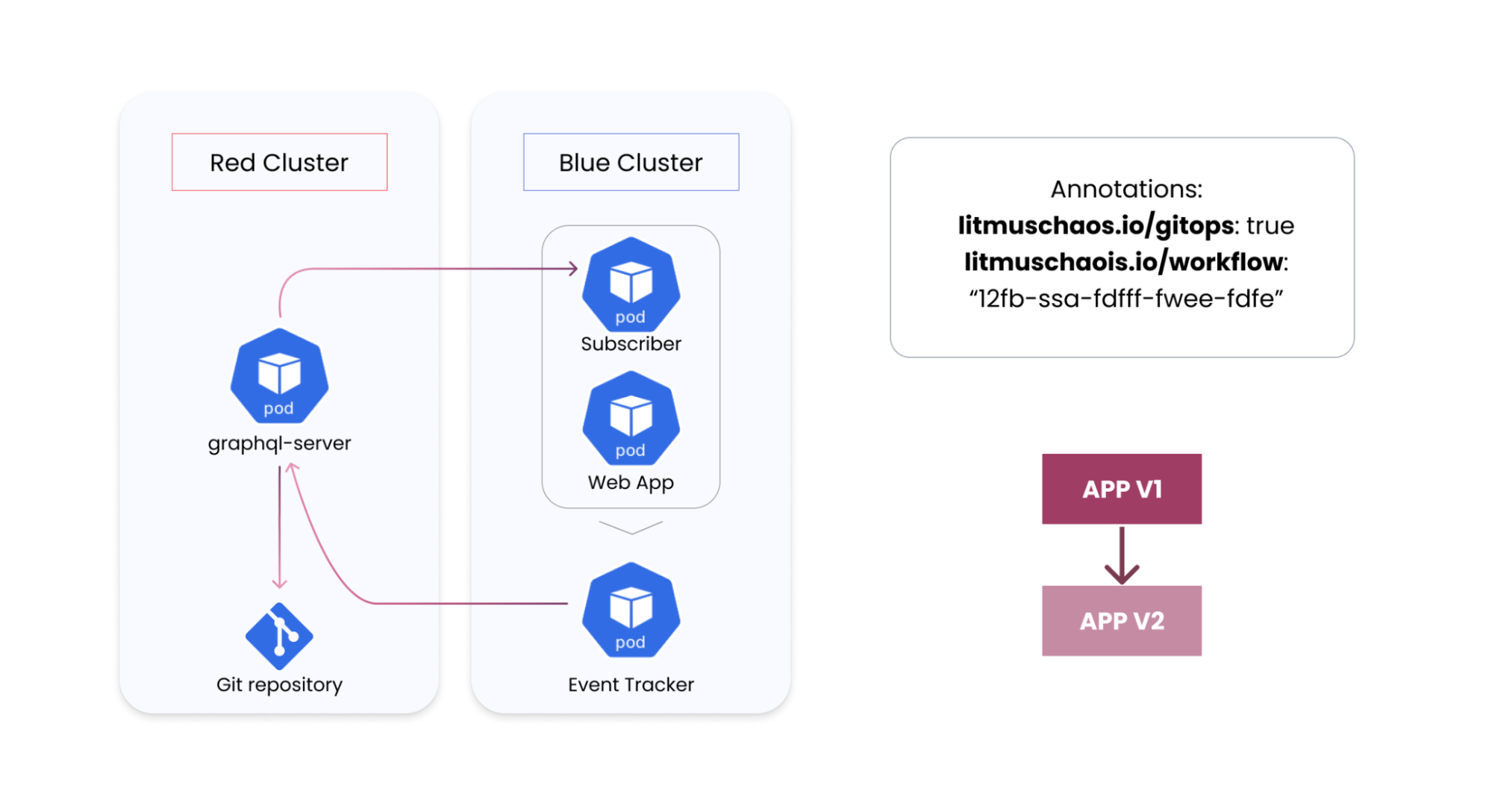 LitmusChaos is simple to deploy on your Kubernetes cluster or namespace. Sign up at litmuschaos.cloud for a quick start on chaos engineering or follow the docs to install Litmus on your own Kubernetes cluster.