Running expo and raw react-native together 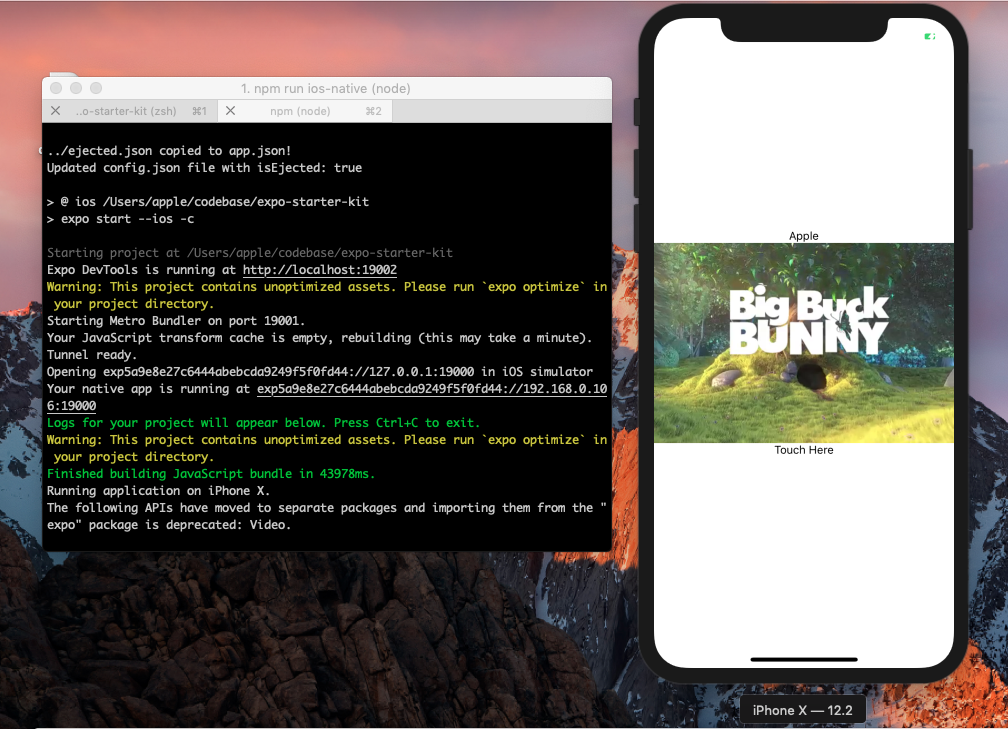 Hello world! Glad you asked this question, about ejecting your expo app. Well, you might have been asked by your senior developer, or boss or you might have just heard it from someone but don’t exactly have a good acquaintance with it. In this article we’ll try to answer these questions, all of you might be dead curious to know this in the simplest way –

Let’s add a secret ingredient called expo-starter-kit to make all of this happen with a breeze.Overview

Expo-starter-kit is a powerful, minimal configuration scaffolding tool, which provides a basic configuration for ejected apps built with expo, saving the developers from the hassle of manually ejecting apps. expo-starter-kit exposes an easy-to-use scripts’ list for handling builds, running an app in ejected as well as in unejected mode.

Why should I eject my expo app?

And the answer is pretty simple. “Ejecting” is the process of setting up your own custom builds for your CRNA app. It can be necessary to do if you have needs that aren’t covered by CRNA or expo. Apps built with React-native are written in javascript, offering a bridge between writing old school platform-specific apps using kotlin, swift, etc. And this is the specialty offered by react-native, which makes it blazing fast and powerful to use.

However, there are some cases where advanced developers need native capabilities outside of what Expo offers out-of-the-box.
The most common situation is when a project requires a specific Native Module which is not supported by React Native Core or the Expo
SDK.

You might want to eject in the following cases:-

Why is this module so special?

When building large, complex native apps using technologies like react-native or ionic, a programmer eventually feels the need for ejecting the application due to the reasons mentioned above and it is a universal truth that ejecting is a painful process.

Also, there might be some cases when a customer might force the programmer to use a native library, which expo or react-native might not offer out-of-the-box. These integrations require the use of react-native link which can only function in the ejected version of the app.

Therefore, this module is made as a headstart for running your app in ejected or unjected mode using simple, and easy to use commands.

Having said enough, let’s get into some real action-packed coding.

NOTE: The instructions below are written specifically for mac. Running Android version of windows should be pretty similar.

Setting up for an iOS device/simulator

Install the following module. Note it is npx (not npm)

Run the init script to specify your application name. It’s gonna prompt you for your app name and a slug name

This package uses bundler as a dependency so let’s go ahead and install it through gem.

Cool! We’re good to go. Let’s run the app now. But make sure you have command 5 running in a separate terminal (depending upon whether you want to run the ejected or the unejected version).

BOOM, we’re up and running. Great job. Let’s come to the cool part. Try starting the app in ejected mode with this simple command

Did you notice that a small icon appeared at your ios simulator, rather than starting the app through expo? You’re right! You just successfully ran the ejected version of your app.

That’s not it, now try running the app in unejected mode.

Setting up for an android device/simulator

Follow steps 1 and 2, the same you did for iOS devices.

Run the init script to specify your application name. It’s gonna prompt you for your app name and a slug name

5. Great job, let’s run it in the unejected mode as well.

Allow permit for drawing over other apps in the android device/ simulator and we’re good to go.

Phew! that was a long one. But fun isn’t it? Now you can go ahead and start building your app. Let’s move further.

How to add a native module into expo kit

Let’s start by building a mock file to mock a native module, which we might want to use other than the ones provided by the expo, and would have to eject our app in order to use it.

As an example, let’s try integrating “react-native-device-info“ into our app, which requires ejection from expo.

And run the application in the unejected mode –

And we’re greeted by this error… :/

No issues! Let’s try and fix this up.

Let’s start by creating a mock module file, mocks/DeviceInfoMock.js, to simulate the behavior of an external non-linked module –

Next, set up your “babel.config.js“ file to set up an alias, so that it reads from the provided path –

Let’s have a look at how have we used this module,

So according to our logic, if the app is not ejected then the DeviceInfo must be fetched from our mock module instead of fetching it from react-native-device-info.

CONGRATS! YOU JUST INTEGRATED A MODULE IN YOUR EXPO APP.

I hope you have noted the fact that for every native module, you have to write a mock for expo. But that’s pretty simple, just see the public functions of the module that you are using and return a mock data/behavior from there. And in your “babel.config.js“ file add the following line inside the if block

So, what we have accomplished with the above starter kit?

We have created a way in which we can run both expo and raw react-native codebase together.

And what did we achieve after doing so?

We are utilizing all that native modules have to offer without letting go of the development environment that expo offers.

Eager to contribute and improve the module, feel free to send us a PR here. https://github.com/codersera-repo/expo-native-starter-kit

Need some help in building your expo app? Feel free to get in touch with us here